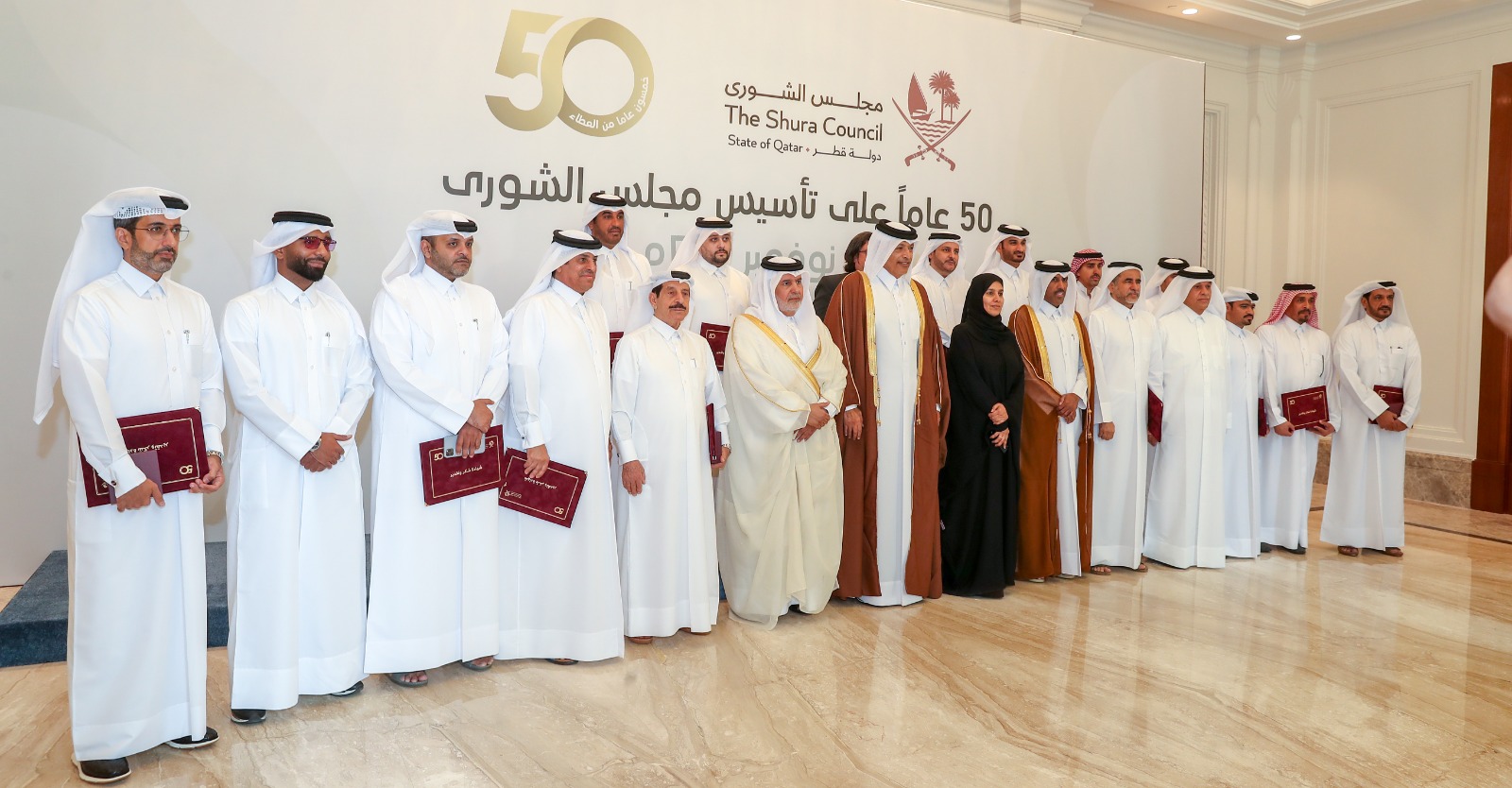 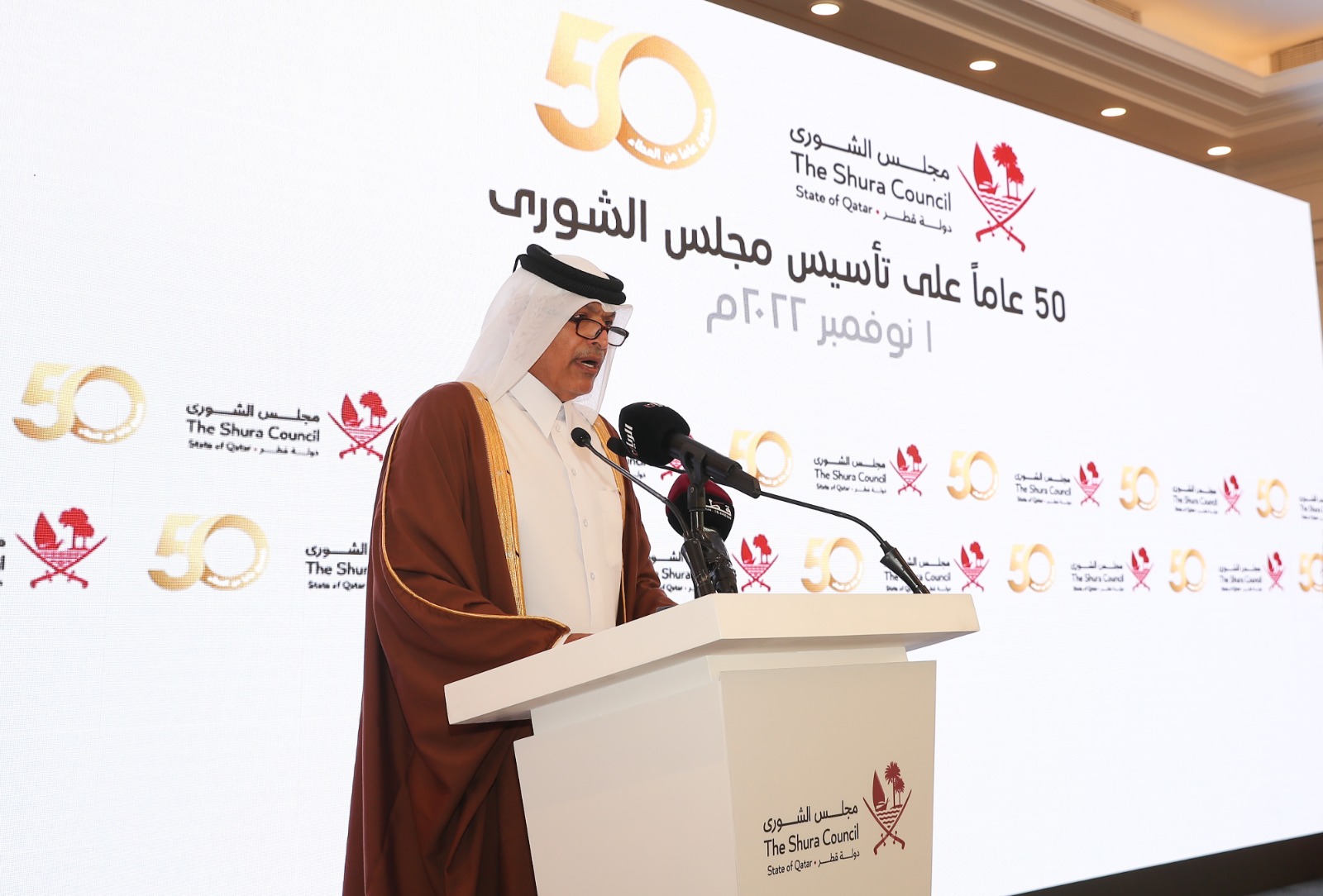 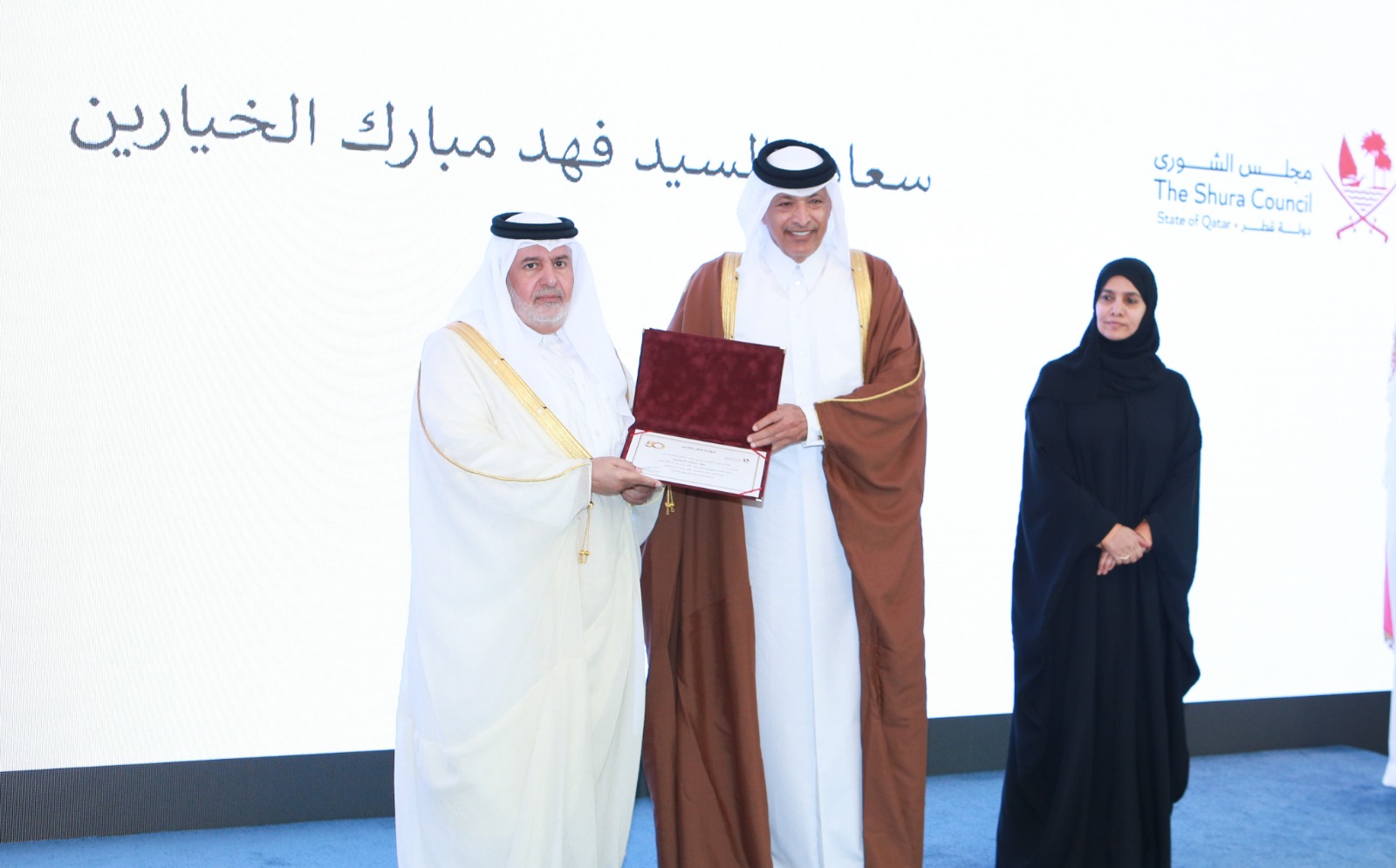 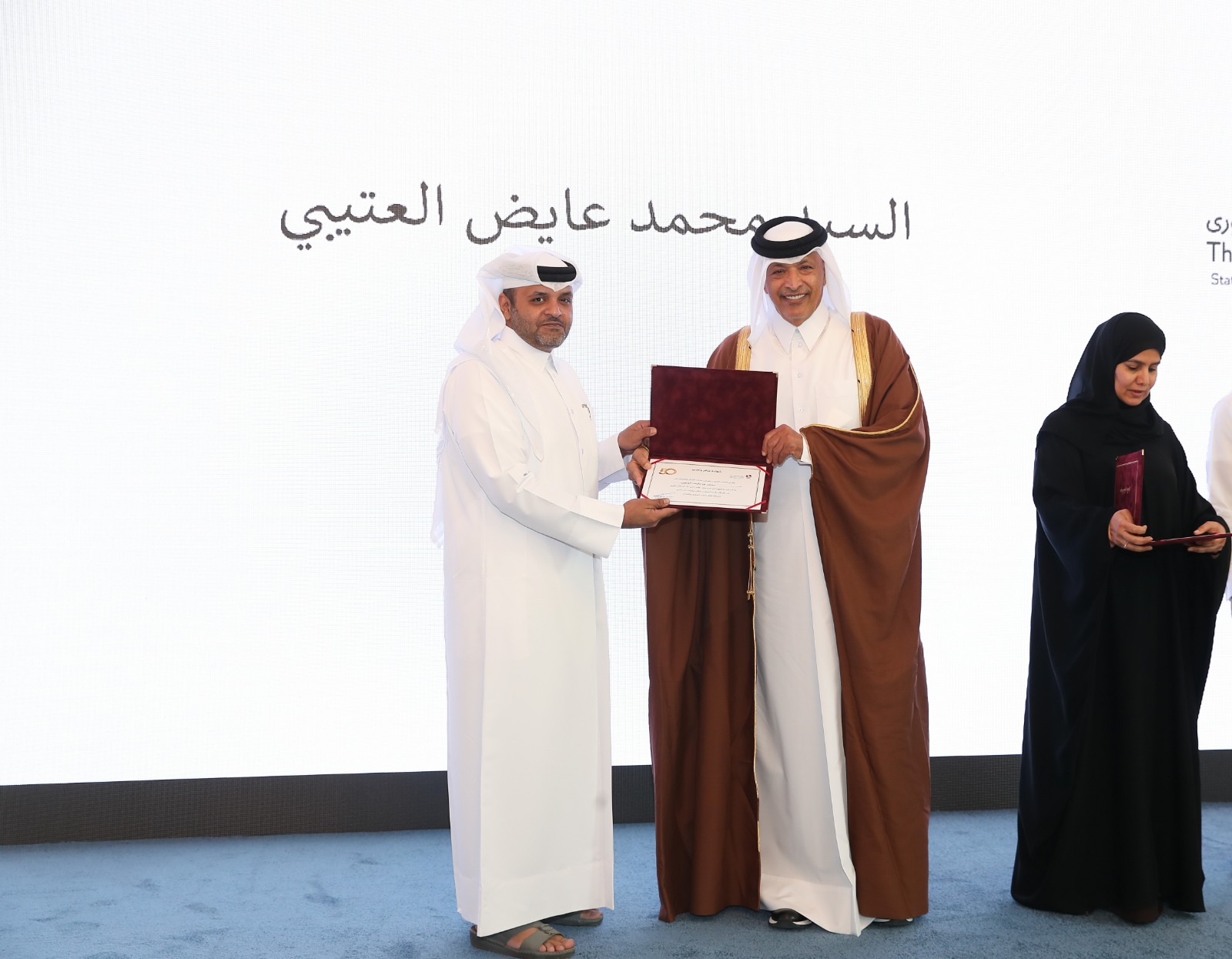 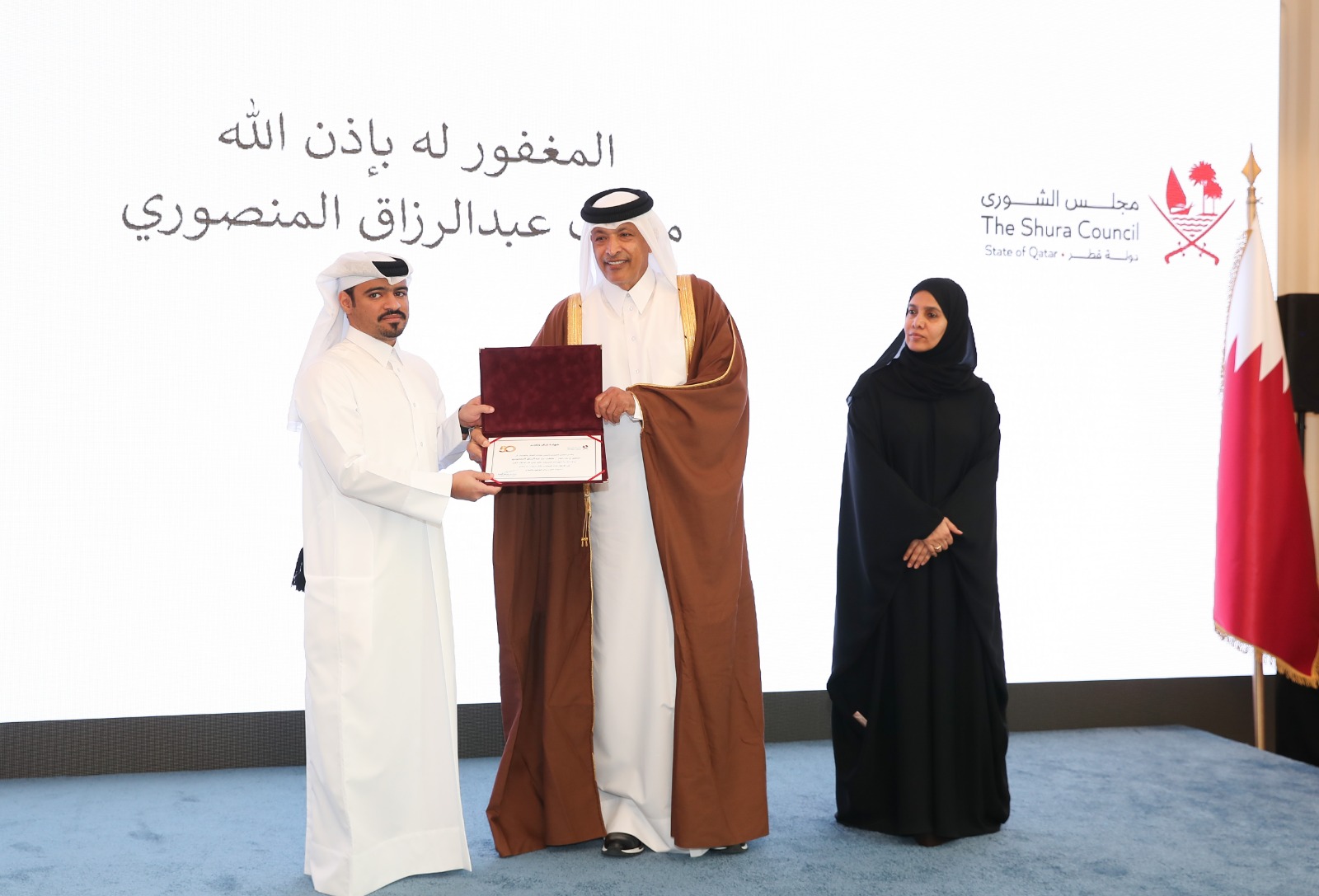 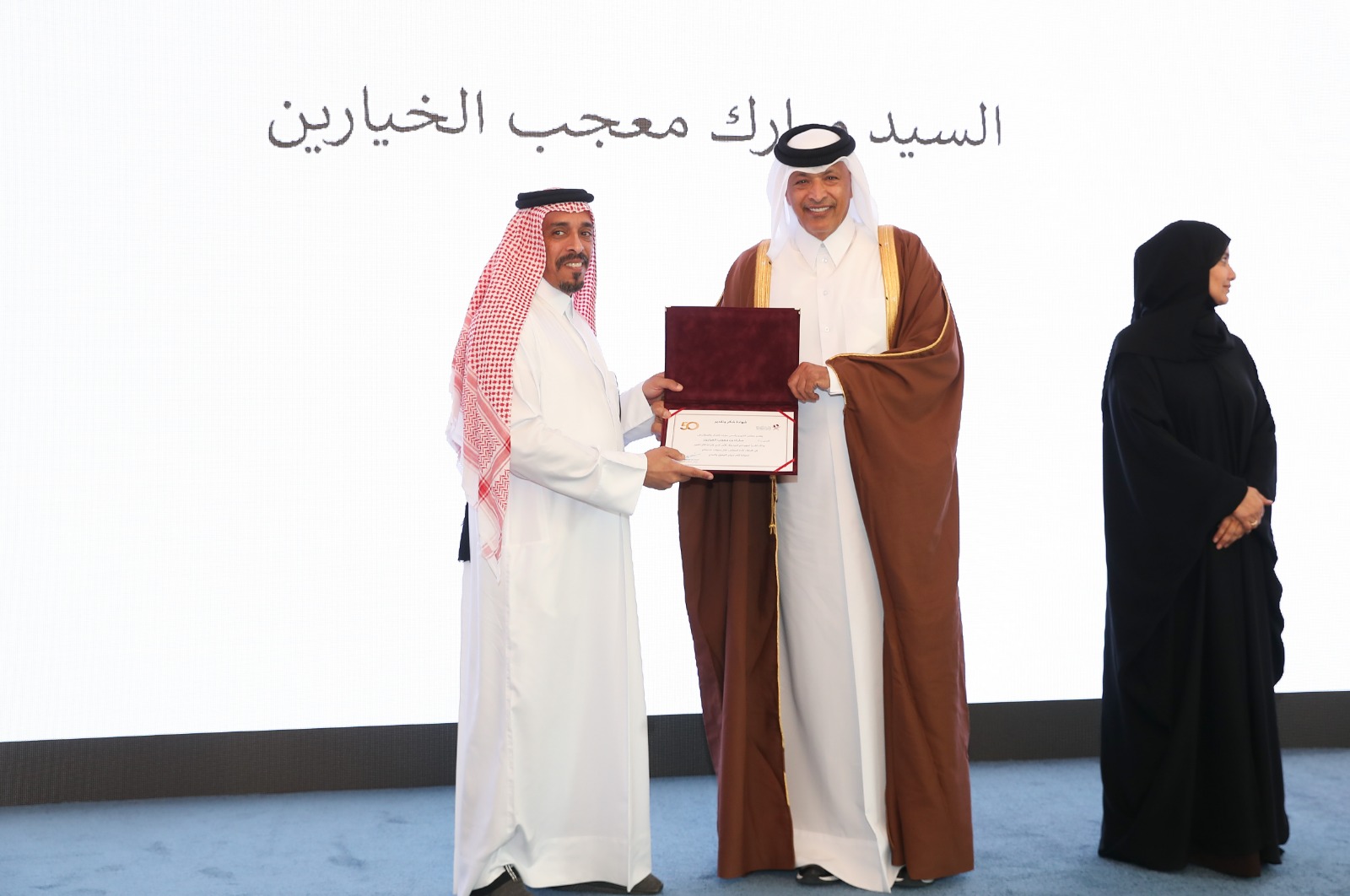 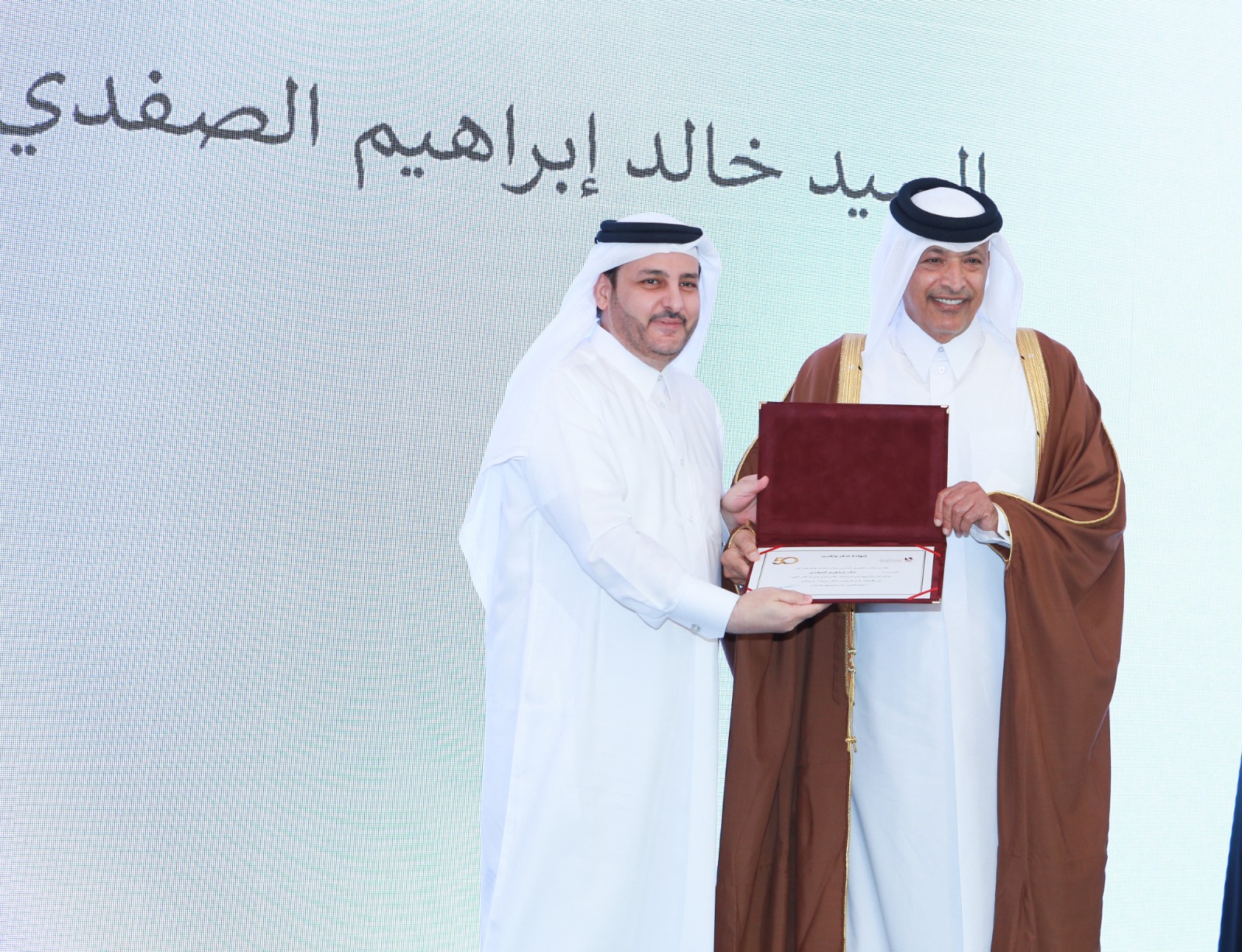 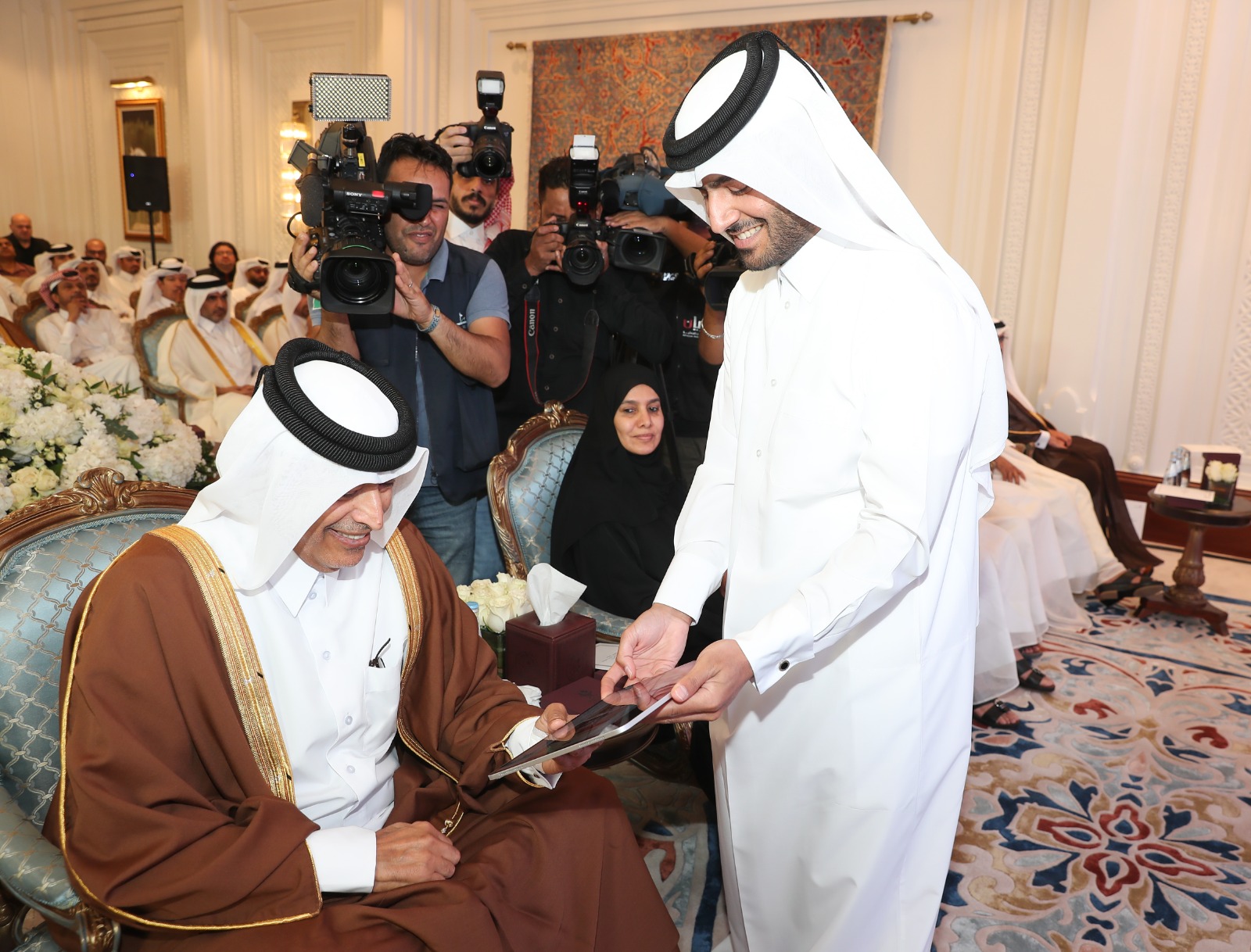 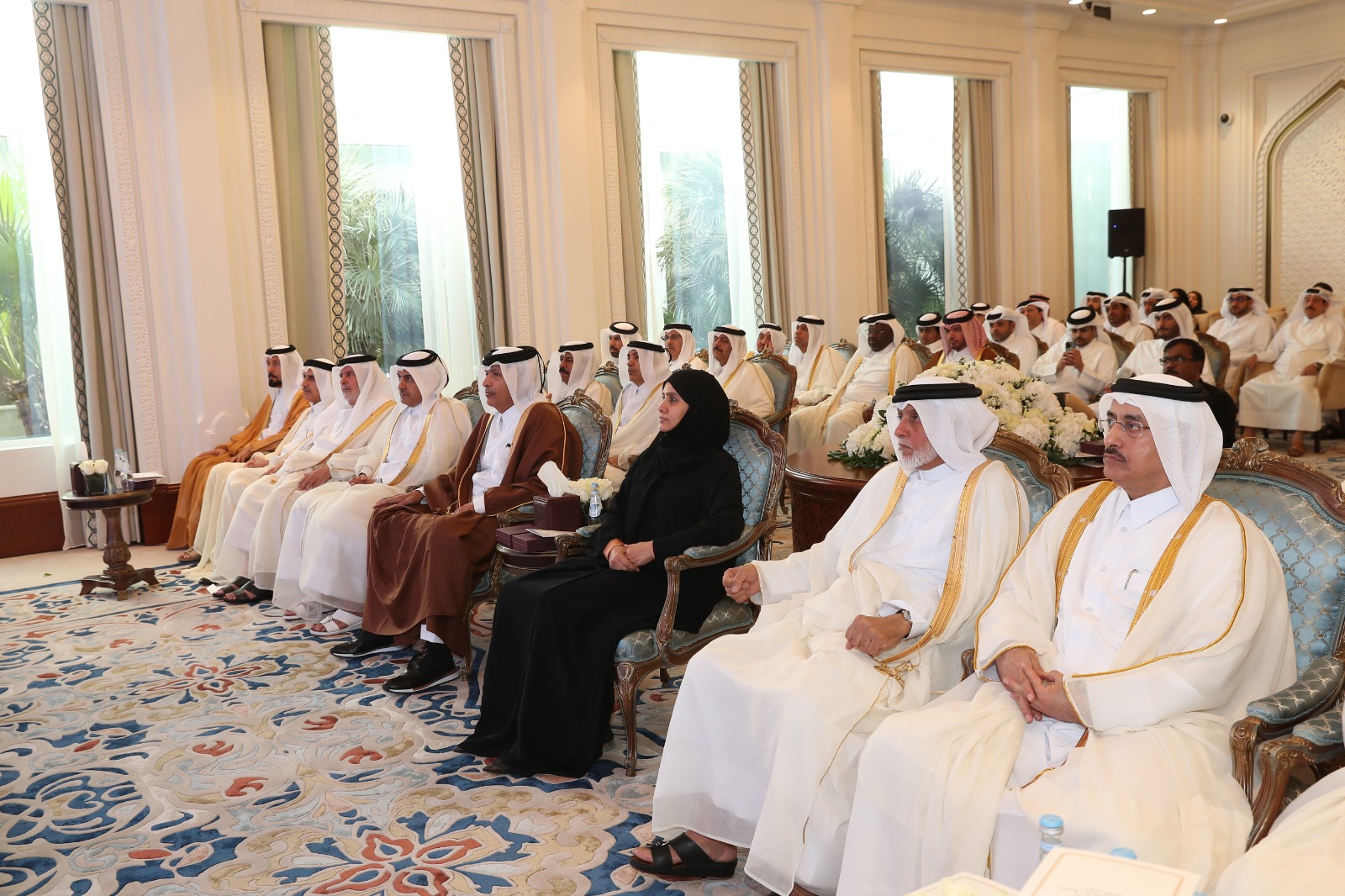 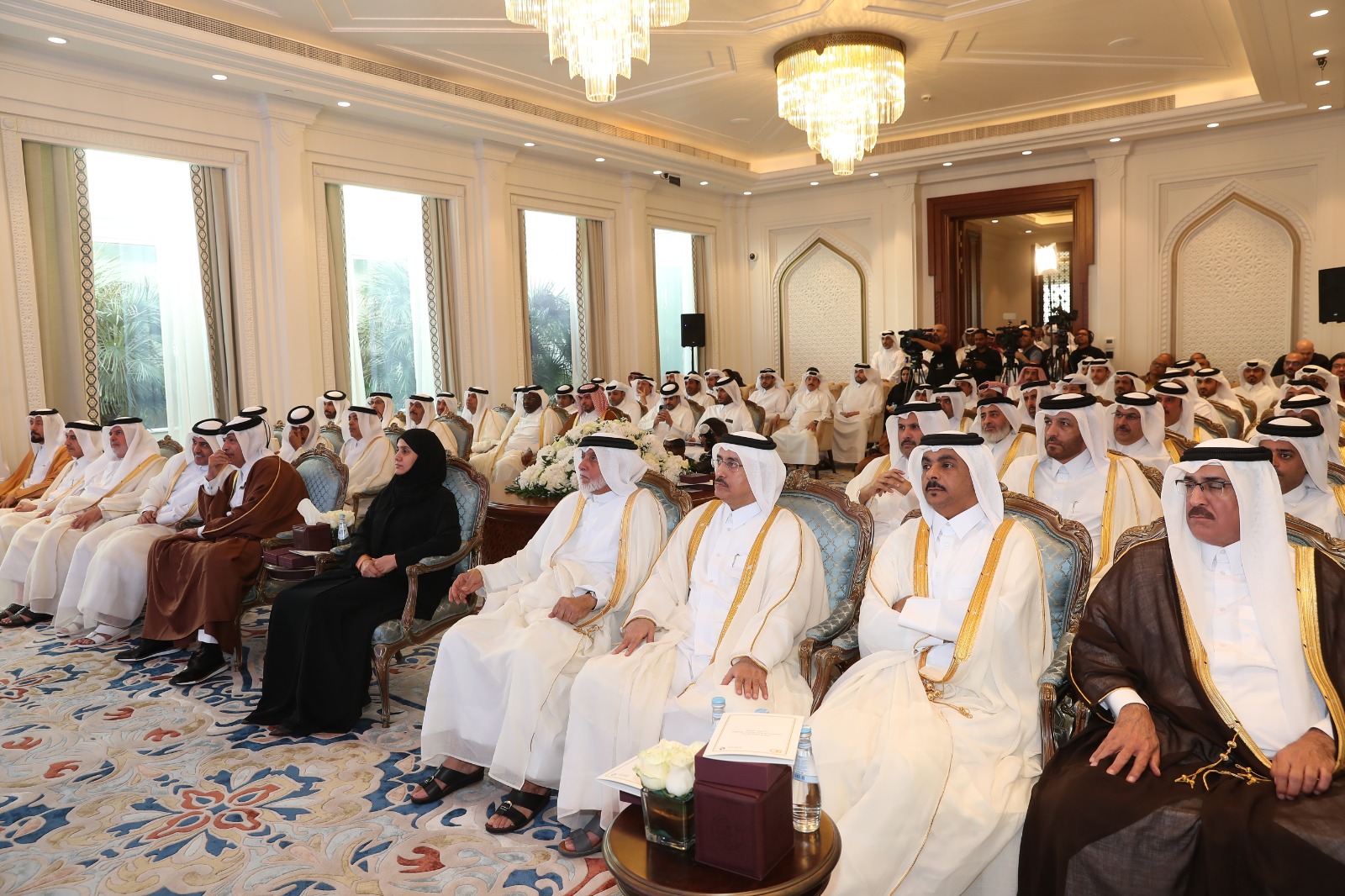 In his remark delivered during the celebration, HE Speaker of the Shura Council Hassan bin Abdullah Al Ghanim expressed his sincere congratulations to HH the Amir Sheikh Tamim bin Hamad Al-Thani on the occasion of 50th anniversary of the establishment of the Shura Council, emphasizing that the eventful march of the council started based on the wise vision of the leaders of the country who laid the blocks of this supreme edifice to represent the willingness and engagement of the loyal Qatari people in managing their country's affairs.

He pointed out that this country has been blessed with a prudent leadership who showed great interest in the population's engagement and pursued gradualism as means of attaining this engagement, highlighting the religious importance of Shura (consultation), which Allah has made an approach of life to discharge the country's affairs.

His Excellency indicated that the ruling systems in the country derived their principles from the true religion, and underscored by the permanent constitution resulting in the emergence of the council as an entity that consists of twenty members to further assist the ruling power in drawing up the legislations through the gradation process, which is compatible and responsive to the requirements of the growth and development of the community and the components of the state culminating in the existence of a parliament, two-thirds of which were freely and directly elected.

HE Hassan bin Abdullah Al Ghanim remembered the ancestors who had established the council, commending their assiduous efforts and accomplishments during the council's march.

His Excellency remembered the step taken by the late HH Sheikh Khalifa bin Hamad Al-Thani in April 1972 by amending the provisional statute issued on April 2, 1970 which had stipulated the regulation of the powers in the state and establish a Shura council that contributes to enacting the laws.

Such a step is a reminiscent of the vital role undertaken by HH the Father Amir Sheikh Hamad bin Khalifa Al-Thani by issuing the permanent constitution of the State of Qatar in 2004 after it was presented to a referendum and endorsed with the 97.66 percent of votes.

His Excellency commended the special care received by the council from HH the Amir Sheikh Tamim bin Hamad Al-Thani which is demonstrated in amending the composition of the council and appointing four women as the first female members of the council in history in 2017, followed by the issuance of the laws (6) and (7) of 2021, in addition to the election of two-thirds of its members through free and direct voting for first time in the council's history.

He touched on the numerous and vital contributions of the council over half of a century, indicating that all the state vital laws and legal instruments were subject to discussion and consideration by the council and received its prior approval before being issued.

His Excellency hailed the efforts of all those who have contributed to the council's accomplishments during its march, including speakers, deputy speakers, members, secretaries and employees, with all their specializations, noting the pivotal role played by those who spearheaded the council's march since the resumption of the presidency by the first president of the council under independence in 1972.

HE Speaker of the Shura Council Hassan bin Abdullah Al Ghanim also pointed out that the council did not detach the people who represent their will in all segments, including men, women and youth, who have directly or indirectly contributed to the council's accomplishments, reiterating that the council puts their interest into consideration.

His Excellency underscored the role undertaken by media, praising its efforts in relaying the council's news, events and activities over years impartially and without disruption.

For his part, HE the former Secretary-General of the Shura Council Fahd bin Mubarak Al Khayarin said in his speech on behalf of the honored employees that the celebration of this occasion confirms that the Council is a single family surrounded with love, brotherhood, happiness, loyalty, and sincerity, thanks to cooperation and partnership between the current and former presidents and members of the Council.

On the honorees' and his behalf, Al Khayarin expressed his thanks to HE Speaker of the Council, HE the Deputy Speaker, the Secretary-General of the Council, and members of the Council expressing his great appreciation for this generous gesture, which is a source of pride and gratitude, considering this honor a tribute to society as a whole, due to its interest and following-up the Council's work, which can only be completed through the concerted efforts of everyone.

During the ceremony, HE Speaker of the Shura Council Hassan bin Abdullah Al Ghanim honored the Council's veterans, expressing his thanks and appreciation to them for their efforts in serving this great and important national institution.

On the sidelines of the ceremony, an exhibition was held that included historical documents and photos, documenting the Council's progress from its inception until today.

In turn, a number of honorees expressed their deep thanks and appreciation for this generous gesture, which reflects the Shura Council's keenness and interest in the work and efforts of its employees over the past years, and the employees' pride in their contribution to the work and development of the Council. In press interviews with Qatar News Agency (QNA), the honorees praised the positive developments that the Council has undergone in the past 50 years. Ali bin Sultan Al Aseeri spoke about his 36-year career, during which he assumed several job positions, the last of which was Director of Administrative and Financial Affairs in the Council, recalling his old fellow members and workers who exerted their utmost efforts to achieve the best for the Council and to advance its mission.

In this context, Mubarak bin Mujeeb Al Khayarin valued the great developments that the Council has witnessed since its establishment, which reflect the keenness of the wise leadership and its interest in this national institution and the importance of its role, recalling his practical experience in the Council, which began in 1992 until now.

Ali Mohammed Al Obaidli extended his thanks and appreciation to the Council, given that such gestures constitute an incentive to work even harder in service of this dear institution, calling on all employees to do everything in their power to do what is best for the Shura Council and to perform their duties to the fullest.

In the same context, Mohammed bin Ayed Al Otaibi highly appreciated the honoring ceremony he and his colleagues received, indicating that this generous gesture, which coincides with the fiftieth anniversary of the establishment of the Shura Council, constitutes an important motivation to do even more towards developing and improving performance in various fields.