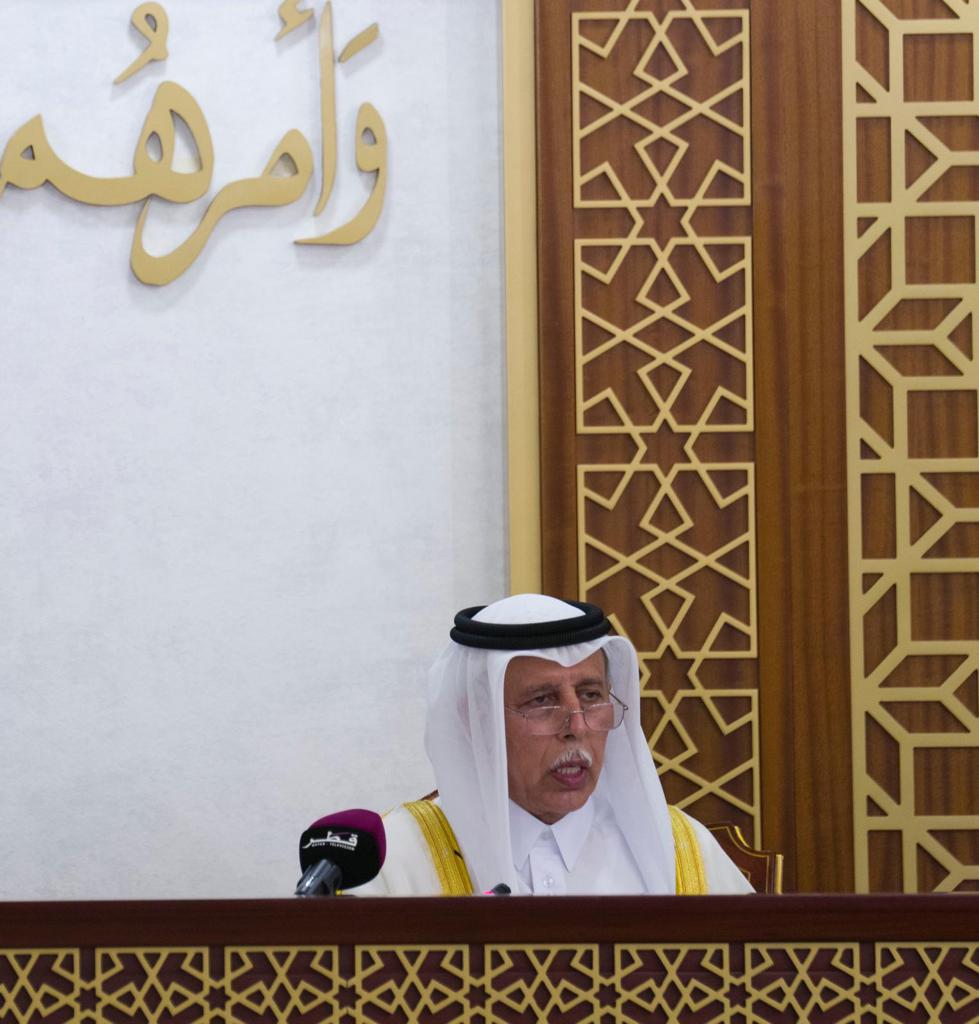 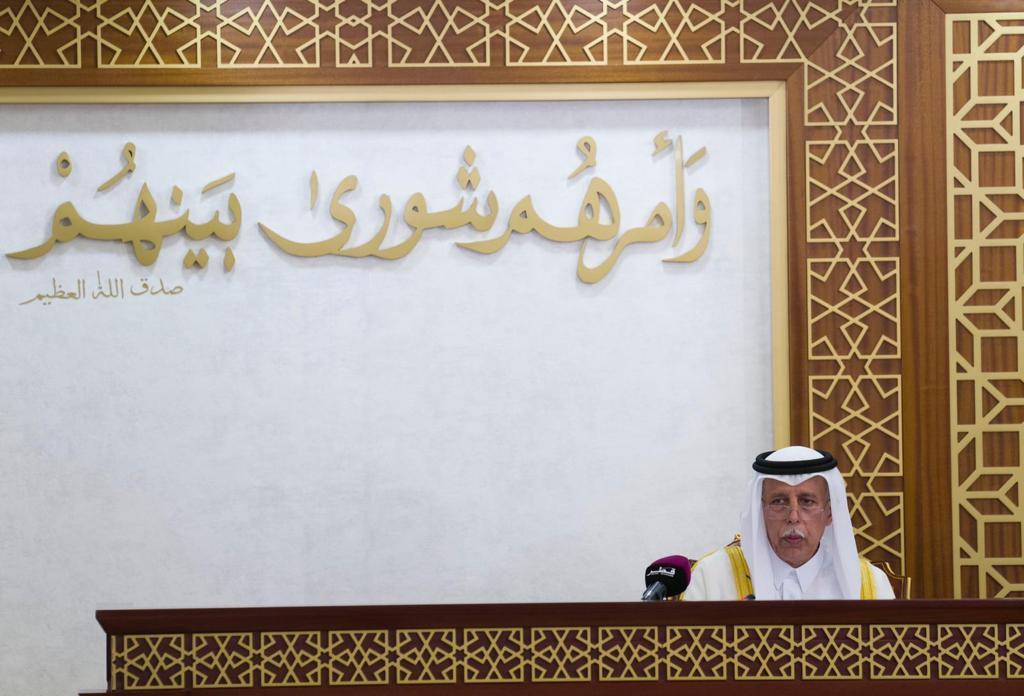 In the name of Allah, the Most Gracious the Most Merciful

Praise be to Allah and prayer and peace be upon whom our Creator sent as a mercy to the Worlds and said to him (We Sufficeth you the mockers),

His Highness Sheikh Tamim bin Hamad Al Thani, the beloved Emir of the our country

Honorable Sheikhs and you Excellencies the Ministers,

May peace and mercy of Allah be upon you,

I and my brothers and sisters the members of the Shura Council are pleased to express our utmost gratefulness and gratitude to Your Highness for gracing the opening of a new session of the Council in its blessed national journey.

We have intently followed Your Highness's speech on the policy of our country and its positions on all developments in internal and external issues. You  (may Allah protects you) have drawn up in your speech this day the main features of the internal and external policy, the continuous efforts to upgrade all essential services and to overcome the developmental challenges in order to attain welfare, peace and security  to citizens. In the internal affairs, we are following the great achievements that are taking place in our country, by the grace of Allah, and thanks to your directives despite the unjust blockade imposed on our country, and despite the rejection of the voice of reason and wisdom. Here we recall to remembrance the strenuous efforts made by the late Sheikh Sabah al-Ahmad al-Jaber al-Sabah, the late Emir of Kuwait, (May Allah forgives his sins) to heal the rift, to reunite, as well we recall his sincere intentions for the security and stability of the Gulf States and their peoples.  His efforts will always remain present in the minds, (May Allah bestow His Overwhelming mercy on him)

Your decision today to hold elections for the Shura Council is another achievement under your wise leadership. We in this Council, as it completes its national mandate next June, look forward to a new council that, God willing, will be an extension of the Shura process and as a promotion to popular participation in decision-making that supports the development process in the country and enhances its security and stability.

The development in the State of Qatar continues to take shape in accordance with the Qatar National Vision 2030, despite the exceptional circumstances of the blockade and the coronavirus (COVID-19) pandemic. The loyal people of Qatar will remember Your Highness's brave and wise stance upon facing the blockade and curtailing its effects, as well as Your Highness's rapid directives in taking effective precautionary measures at the beginning of the outbreak of the virus, in addition to providing free medical supplies for citizens and expatriates, which had a great impact on successfully controlling the spread of the virus, thus making our country to be thanks to Allah, one of the countries with the lowest mortality rate due to the pandemic, according to the World Health Organization (WHO), which hailed the country for its distinguished performance in combating the virus, in addition to the financial assistance to reduce the effects of the pandemic in the country, as well as providing humanitarian aid to combat the pandemic in many countries of the world, and contributing to support multilateral health care institutions to develop vaccines. Here we express our gratitude and appreciation to the efforts made by the Supreme Committee for Crisis Management, chaired by H.E. the Prime Minister and Minister of Interior, to contain the pandemic, while also extending our gratitude and appreciation to the medical and health personnel for their exceptional efforts and undeniable human sacrifices that deserve appreciation and consideration. We also express our pride in the values of solidarity and the spirit of volunteering shown by various components of the society to combat the pandemic.

On the external field we share your opinion and commend your honorable and consistent positions on our nation's issues, on just regional and international issues, and on various regional issues. Here we specially commend your firm stances towards the Palestinian issue and your call for lifting the siege of Gaza, returning peace process to its track, ending occupation, and establishing an independent State of Palestine based on the borders of June 4th, 1967 with East Jerusalem as its capital.

The freedom of expression doesn't mean offending others in their religion and belief and dealing with double standards in this regard. It is unreasonable and illogical to link religion with terrorism and to link any ones crime to their religion. We condemn and reject insulting the Holy Prophet Muhammad (PBUH) and Islam, the religion of peace and harmony. We also condemn any terrorist act, whatever its form and source. Terrorism is not associated with color, religion, or ethnicity. We in Qatar had long ago called on the UN and other world leaders to put in place laws, procedures and controls that prevent insulting religions and sanctities and attacking them under any pretext for the sake of a world where peace, understanding and cooperation prevail among its States and peoples.

What you have mentioned concerning the he Council’s efforts and activities is a testimony of which we are proud of, which wouldn't have been possible without Allah's grace and You Highness’s care.

Allow me to briefly touch upon some of what the Council did during the last session. The Council as usual worked in cooperation with the esteemed government to complete all draft laws and decrees forwarded to it by the esteemed government, which exceeded 20 draft laws and decrees covering the field of economy, providing the legislative environment for internal and external investment, food security, health, transportation, organizing press and media work and others, in addition to public issues which concerned citizens, some of which were discussed by the Council in the presence of a number of ministers according to their competences. We sincerely thank the esteemed government for its positive cooperation and interaction regarding the handling of the Council’s proposals and recommendations.

The Council has continued its efforts in the parliamentary diplomacy field to publicize the State of Qatar's policy and achievements and to address many regional and international parliamentary activities the attempts of the blockading countries to undermine Qatar's reputation and position. The Council also achieved by the grace of Allah and Your Highness’s support a number of important international success, including what you referred to in your speech (May Allah protects you) concerning the establishment of the Office of the United Nations Counter-Terrorism for Parliamentarians to be based in Doha. This Office comes as an affirmation of the international community's confidence in Qatar, as well as in appreciation of Your Highness’s efforts (May Allah protects you), in combating terrorism and addressing its roots and causes.

By the grace of Allah Qatar, represented by the Speaker of the Shura Council, was unanimously elected, Chair of the Global Organization of Parliamentarians Against Corruption GOPAC and transferred its secretariat to Doha, at the organizations seventh meeting held in Doha in Dec. 2020 coincided with the International Anti-Corruption Excellence Award winners Your Highness the Emir allocated for excellence in fighting corruption at the organization's fourth meeting held in Kigali. This is in addition to the signing of a number of memoranda of understanding for parliamentary cooperation with regional and international parliamentary organizations and parliaments of a number of friendly countries, as well as in addition to the Inter-Parliamentary Union recently selected the Shura Council in Doha as the location from which it launched its commemoration book of 130-year anniversary of its establishment.

The Council looks forward to being able in the current Session to achieve an additional and greater momentum to contribute to the State's issues and concerns. I take this opportunity to extend my thanks and appreciate to my brothers and sisters the members of the Council for their efforts. We pray to Allah the Almighty to help us all to do our duty and to perform the mandate in the manner that satisfies Allah about us, renewing the allegiance and loyalty to Your Highness as an Emir and leader of our country, assuring the determination to redouble efforts, guided by your saying, (May Allah save you) “we are a people who adhere to our principles and our values, we don't live on the margins of life, we don't go lost, without goal and  we are not followers of any, waiting for his directives”. Yes, this is our country, Qatar, Oh Your Highness, and it will remain, by the will of Allah, as it was known to be, firm on the right, faithful to its principles and values, and an owner of its national decision, a resource for good, and a source of giving.

May Allah protect you.

May Allah’s peace and mercy be upon you.