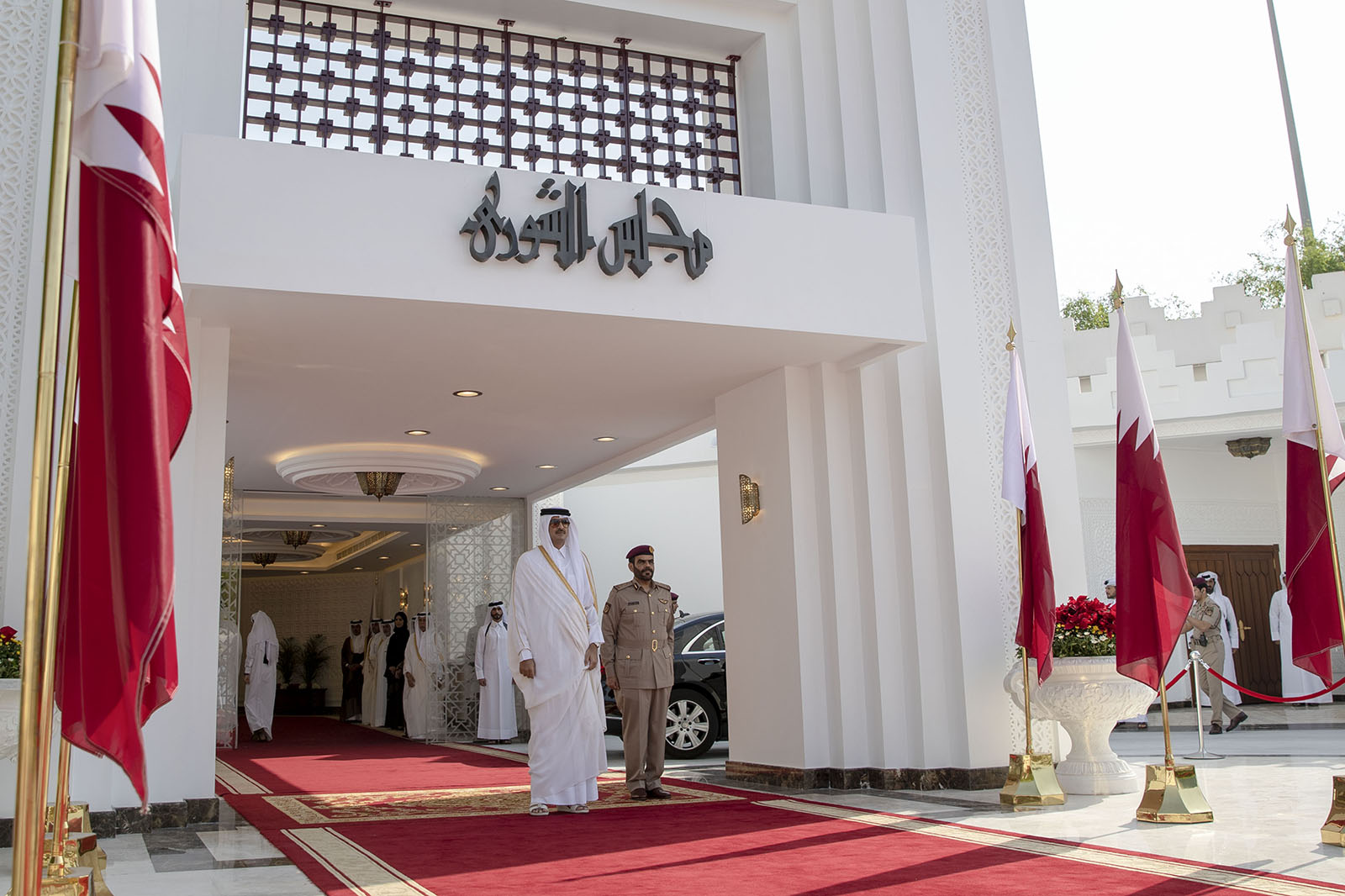 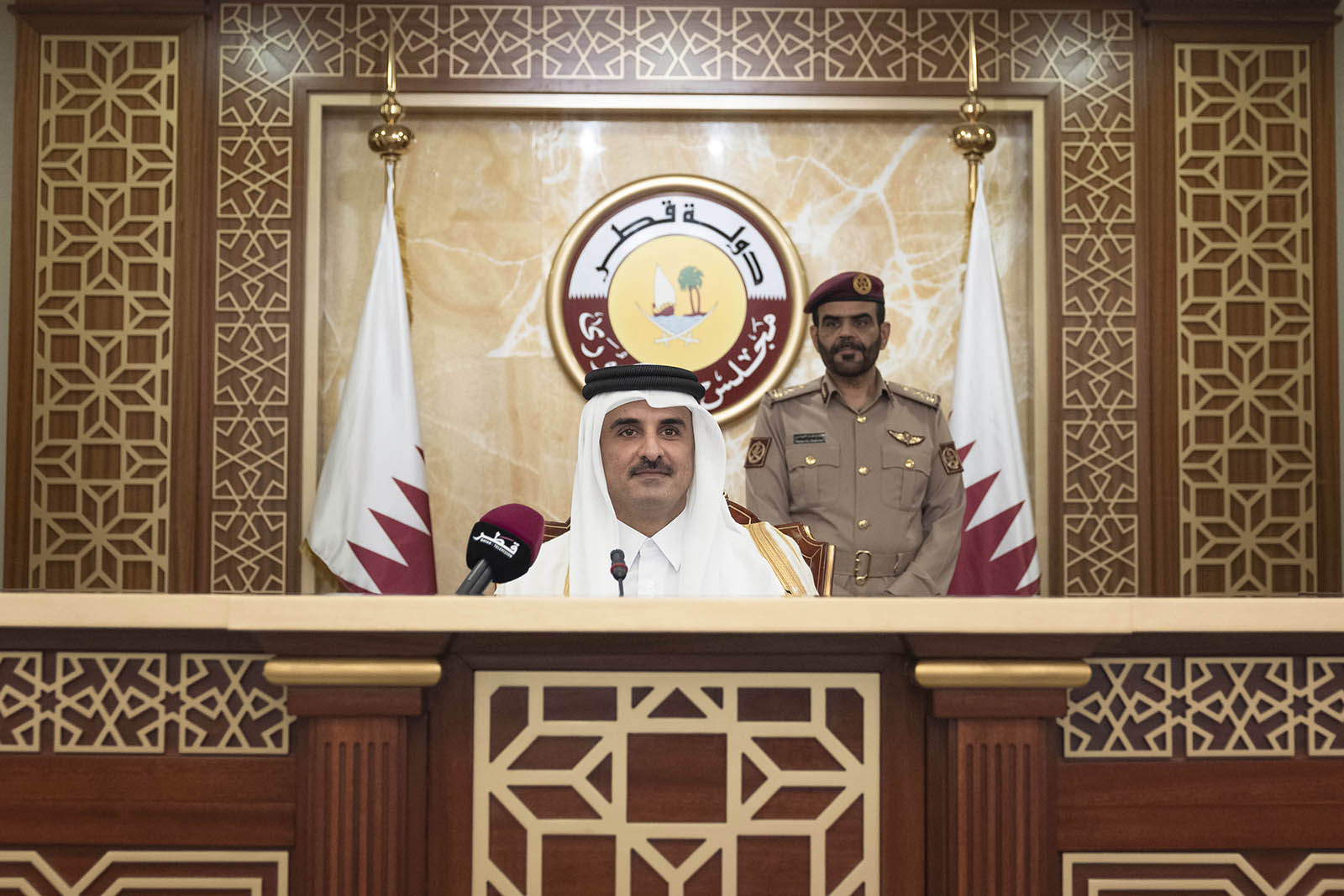 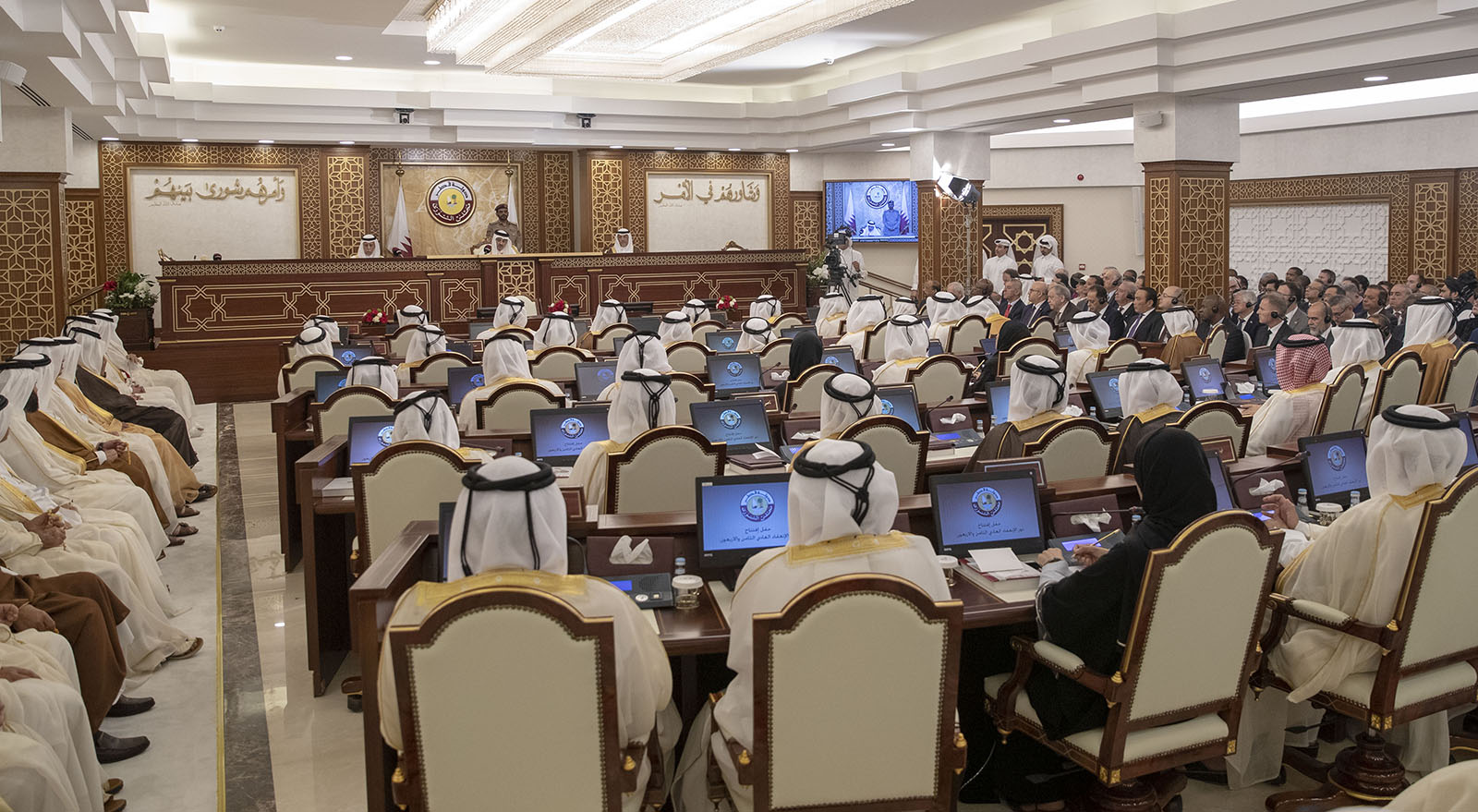 His Highness The Amir Sheikh Tamim bin Hamad Al Thani inaugurated the 48th ordinary session of the Shura Council at its premises on Tuesday morning.

The inauguration was also attended by HE the Prime Minister and Minister of Interior Sheikh Abdullah bin Nasser bin Khalifa Al Thani and a number of Their Excellencies Sheikhs, Ministers, heads of diplomatic missions accredited to the State and the State's dignitaries.

Our Gulf region is witnessing accelerated events and very serious and delicate developments threatening the security and stability of the region, which oblige our states and the international community to double their efforts to halt the deterioration and to adopt dialogue as a means of settling disputes. Sisterly states have started to realize the rightness of our position that GCC countries have no interest in tensioning the situations. Regrettably, the absence of the GCC role amid these circumstances has been observed due to the fabricated crises, the resources they waste and the potentials they waste.

Despite the unjust blockade imposed on our country, the right position and responsible behavior have reinforced Qatar's status and consolidated its role as an active partner on the regional and international arenas.

In our foreign policy, we have chosen a strategy based on a balance between our firm principles and our security and economic interests. All this is within the framework of defining our civilizational, geographical and strategic position in this world as well as knowing our potentials. We have chosen to assume a role to facilitate dialogue, just solutions and peaceful settlement of disputes. We have participated in all international and regional efforts that aim to achieve peaceful coexistence, protecting the environment, fighting poverty and in all efforts amid at combating terrorism and its causes.

The seventy-fourth session of the UN General Assembly was an appropriate opportunity to remind the international community of the strategic importance of our Gulf region, that necessitates the achievement of political and security stability in it, which is a goal that would only be achieved through peaceful means and through making the Middle East, without exception, a weapons of mass destruction free-zone. It was also an opportunity to remind the international community that peace in the Middle East can't be achieved without enabling the Palestinian people to exercise their legitimate rights, foremost among them is the establishment of an independent Palestinian State on the 1967 borders, with East Jerusalem as its capital, as stated by the resolutions of the international legitimacy and the Arab Peace Initiative. Accordingly, the normalization of relations with Israel without a just solution to the problem of Palestine is a mere illusion.

Regarding the Syrian affair, we assert our firm position on the necessity of finding a negotiated political solution among all Syrian parties in accordance with Geneva Communique (1) and the Security Council Resolution (2254) to maintain the unity, sovereignty and stability of Syria, and we reiterate our rejection of the Israeli decision to perpetuate Israel's sovereignty over the occupied Syrian Golan Heights.

With regard to Yemen, we believe that the continuation of the conflict poses a direct threat to regional and international security and peace. We call on all parties to give priority to the higher interest of the brotherly Yemeni people and to spare them further suffering. We call on the active powers of the international community to act on providing the appropriate conditions for the resumption of the political solution based on the Gulf Initiative and the outcomes of the National Dialogue and Security Council Resolution (2216), and to help the Yemeni people conduct an inter-Yemeni dialogue without foreign interference to realize the aspirations of the brotherly Yemeni people in security and stability.

Regarding the situations in Libya, we reaffirm the necessity of achieving national concordance among all components of the Libyan people without any external interference. We renew our support for the recognized Government of National Reconciliation and reaching a comprehensive political settlement that preserves Libya's sovereignty and territorial integrity, and fulfills the aspirations of its brotherly people for security and stability. We affirm that the support of some countries for those who are outside the political process and international legitimacy is the main impediment to achieving stability in Libya.

As for the brotherly Sudan, we value the positive steps achieved in the political process, the latest of which is the formation of the Sudanese government, and we renew our support for it to meet the aspirations of all Sudanese people.

In conclusion, I pray to Allah to help us all in serving our country, and to achieve further aspirations of our people for progress and prosperity.

May Peace, Mercy and Blessings of Allah be upon you