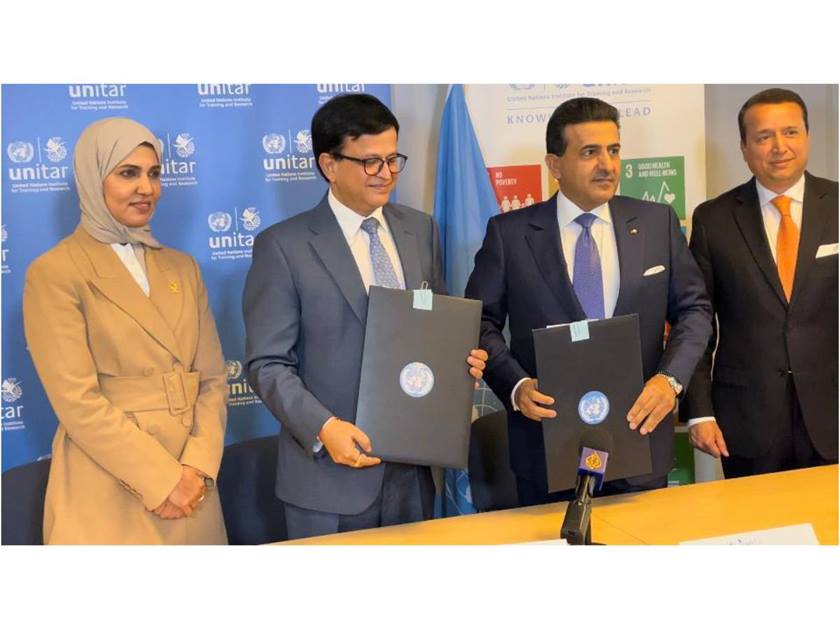 HE President of the Global Organization of Parliamentarians Against Corruption (GOPAC) Dr. Ali Bin Fetais Al Marri signed a cooperation agreement with HE UN Assistant Secretary-General and Executive Director of the United Nations Institute for Training and Research (UNITAR) in Geneva Nikhil Seth, to launch a global initiative to train parliamentarians to act against corruption, which seeks to consolidate the principles of justice and good governance through capacity-building.

Under this initiative, a guide will be issued to train parliamentarians in various countries of the world to address the phenomenon of corruption, by taking advantage of international parliamentary practices, and studying the parliamentary systems, mechanisms used and the legislation issued to combat corruption.

This initiative also establishes a virtual forum and an advanced global digital and interactive platform that responds to international standards of anti-corruption training, enabling the organizers to hold training workshops and round tables to discuss this rampant scourge in various countries, exchange experiences and propose ways to address it at various national, regional and international levels.

This initiative will be implemented during the years 2023 and 2024, and will be available to various countries of the world, as it is presented in three languages: Arabic, English and Spanish, while the initiative targets more than a thousand people in various parliaments of the world.

This training takes the principles of the Sustainable Development Goals as a basis for it, and also seeks to sensitize members of parliaments to these goals, and urges parliamentarians to join these international efforts, and benefit from the activities held by the United Nations and its agencies, especially in the areas of combating corruption.

The signatories agreed to hold periodic reviews of the training program to ensure continued response to developments in corruption practices, and to find effective ways to address them in line with the digital progress experienced by various countries of the world.

In this context, HE Nickel Seth stressed the importance of this partnership to develop the capabilities of parliamentarians in the fight against corruption and raise awareness of the Sustainable Development Goals, especially after the changes that the world is witnessing today at various levels.

His Excellency added that he is looking forward to watching the FIFA World Cup Qatar 2022 and the success of the State of Qatar in hosting the tournament, highlighting that this edition of the tournament will be a resounding success.

The signing ceremony was attended by HE the Permanent Representative of Qatar to the United Nations in Geneva Dr. Hind bint Abdulrahman Al-Muftah, and HE UNITAR Chairman Luis Gallegos.