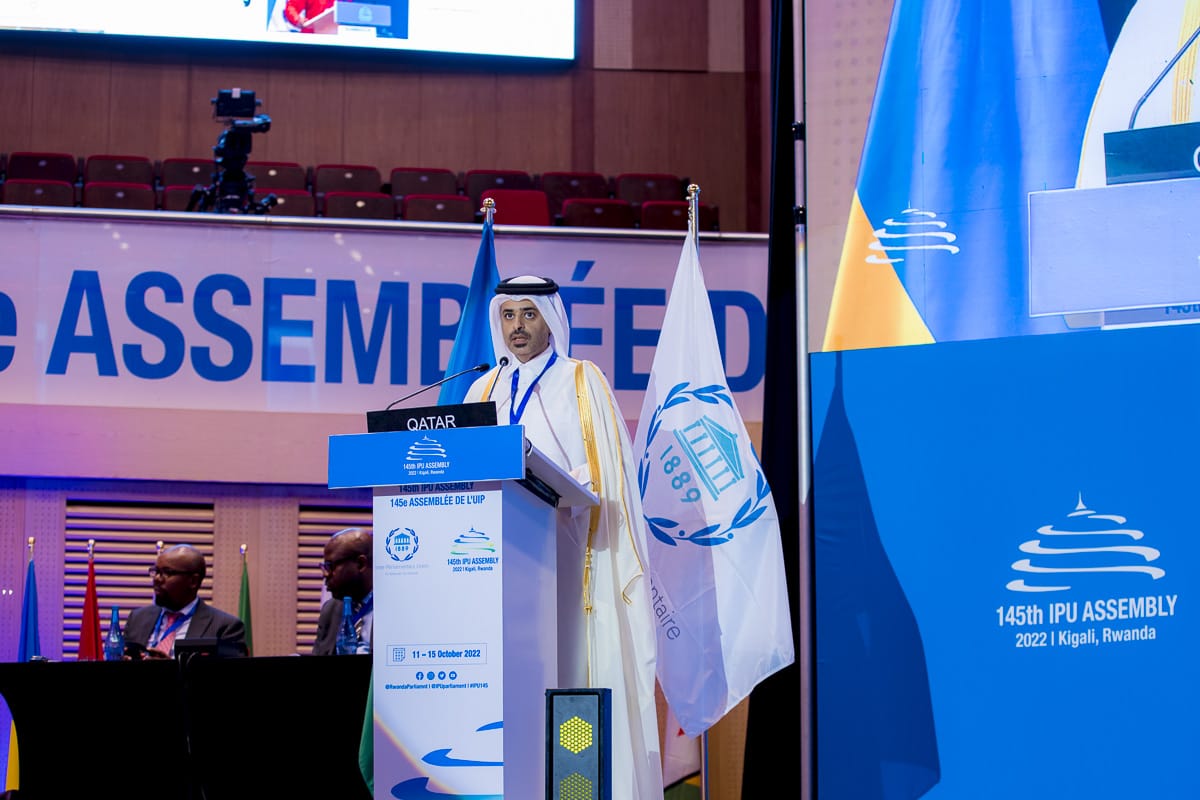 During the 145th General Assembly of the Inter-Parliamentary Union (IPU), held in the Rwandan capital, Kigali, the Shura Council reviewed the efforts of the State of Qatar in settling disputes and supporting the sustainable development goals at various levels. This came in the intervention delivered by HE Mohammed bin Omar Al-Mannai, a member of the Shura Council, during a session of the General Assembly to discuss the activities and initiatives that have been taken to activate and implement the decisions of the Inter-Parliamentary Union. HE Al-Mannai said that the State of Qatar, under the leadership of HH the Amir Sheikh Tamim bin Hamad Al-Thani, is making great efforts to establish and strengthen peace through mediation to settle disputes and resolve disputes in different regions of the world, and in financing the activities and initiatives undertaken by the United Nations and its affiliated bodies in order to combat terrorism, violent extremism and organized crime in pursuit of the sustainable development goals approved by the United Nations. His Excellency stressed the council's belief in the goals of the Inter-Parliamentary Union by working to implement its decisions and being guided by its directions in drawing up the council's plan in accordance with the policy of the State of Qatar, which is based on the principle of supporting international peace and security, resolving differences and conflicts in sound ways, promoting sustainable development in the world by fighting poverty and deprivation, and supporting educational policies, environmental preservation, provision of medicine, health prevention, and social care for all. In this aspect, His Excellency reviewed the initiatives of the Shura Council to disseminate the decisions of the Inter-Parliamentary Union and coordinate with the government to support its development plans in everything related to education, health, maintaining a sound environment, and providing all means of decent living for the citizens and residents of the country, regardless of their gender, race and beliefs, and respect for the principle of equal opportunities, along with Qatar's efforts in the field of environmental preservation, where he referred in this context to the establishment of a special ministry for the environment, especially since the state's directions pay great attention to this aspect. In another aspect of his intervention, His Excellency pointed to the organization of the first World Cup tournament on environmentally friendly stadiums equipped with cooling with solar energy, in addition to awarding all municipalities of the country as healthy municipalities, in addition to the Education City and Qatar University, noting that the State of Qatar has completed the preparation of all special equipment for hosting the FIFA World Cup Qatar 2022, and taking all precautions in this regard to make this tournament one of the most successful sporting events in history. His Excellency said, "The hospitable Qatari people will provide all the appropriate conditions to receive hundreds of thousands of visitors from different regions of the world, and give them the opportunity to get acquainted with the economic, social and cultural achievements that have been achieved in the country thanks to the wise leadership of HH the Amir, may God protect him." In his speech to the forum on the sidelines of the General Assembly of the Inter-Parliamentary Union, His Excellency highlighted the efforts of the State of Qatar and its readiness to host the World Cup, stressing that the state had created all the appropriate conditions to organize the best tournament in history. His Excellency said, "The State of Qatar will be on Nov.20 a destination for athletes and sports lovers from all over the world, as it has completed all its preparations and provided all material and human capabilities to hold the FIFA World Cup Qatar 2022." His Excellency also reviewed the efforts of the State of Qatar in terms of empowering women, promoting equal opportunities for citizens, building sustainable development, and its efforts to support international peace and security. His Excellency said, "The wise and rational policy of HH the Amir, focuses on equality between all citizens regardless of gender, whereby women and men have the opportunity to access all jobs and assume all responsibilities." His Excellency explained that opportunities are also available for everyone to access the best types of education, as "the number of girls graduating from higher education has become more than the number of male graduates, and the state has secured all means to ensure access to social justice and equal opportunities." His Excellency referred to the efforts of the State of Qatar and its contribution to strengthening international peace and security, maintaining global stability, and making all possible efforts to resolve all differences and disputes by peaceful means through negotiations and mediation. The Shura Council is participating in the meetings of the Inter-Parliamentary Union in the Rwandan capital, Kigali, with a delegation headed by HE Deputy Speaker of the Shura Council Dr. Hamda bint Hassan Al Sualiti.