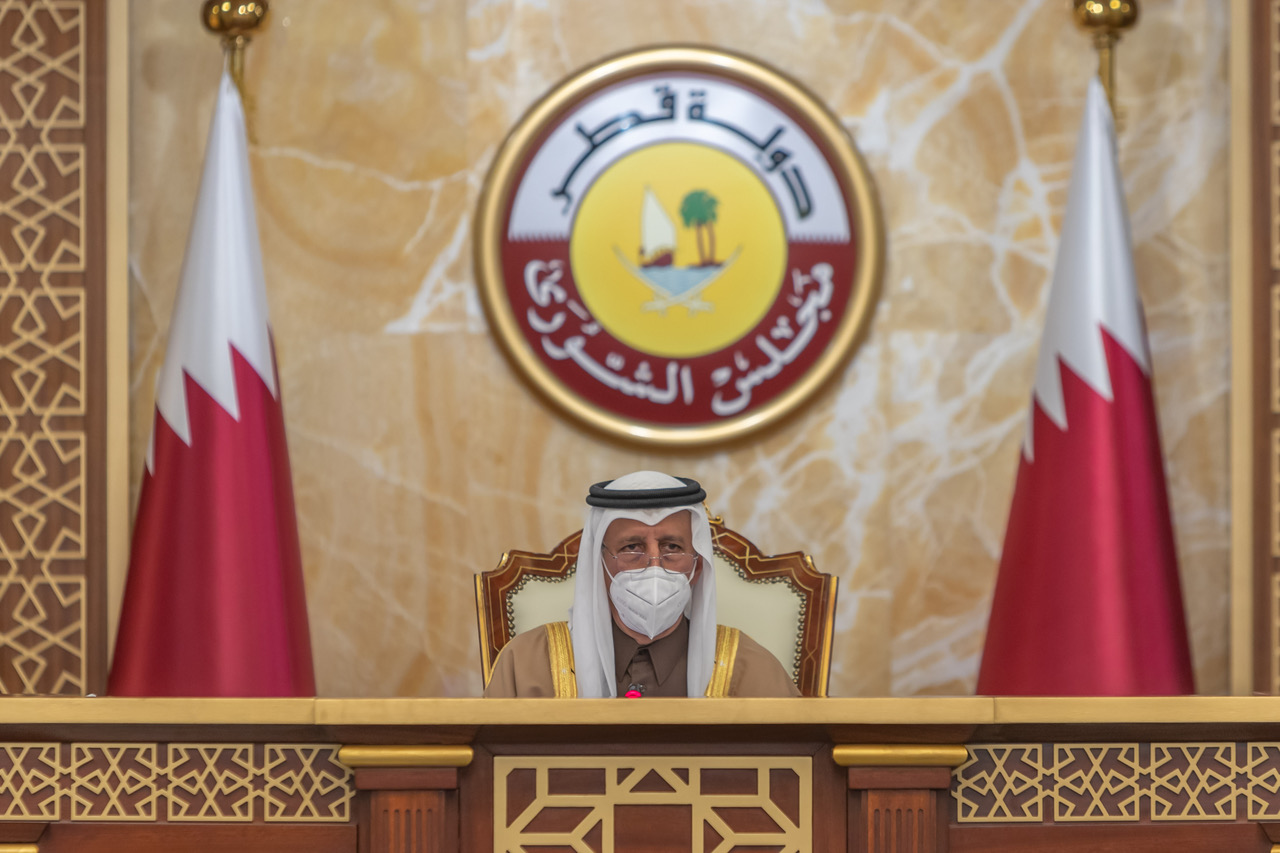 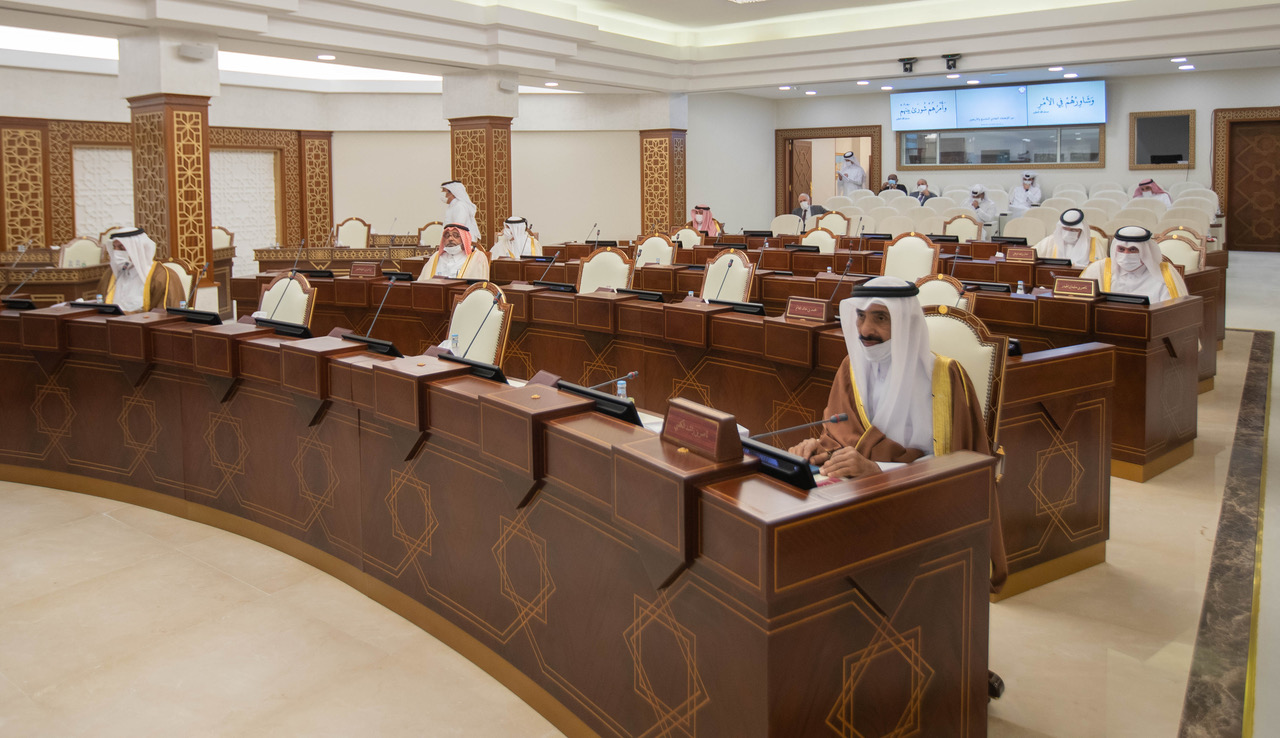 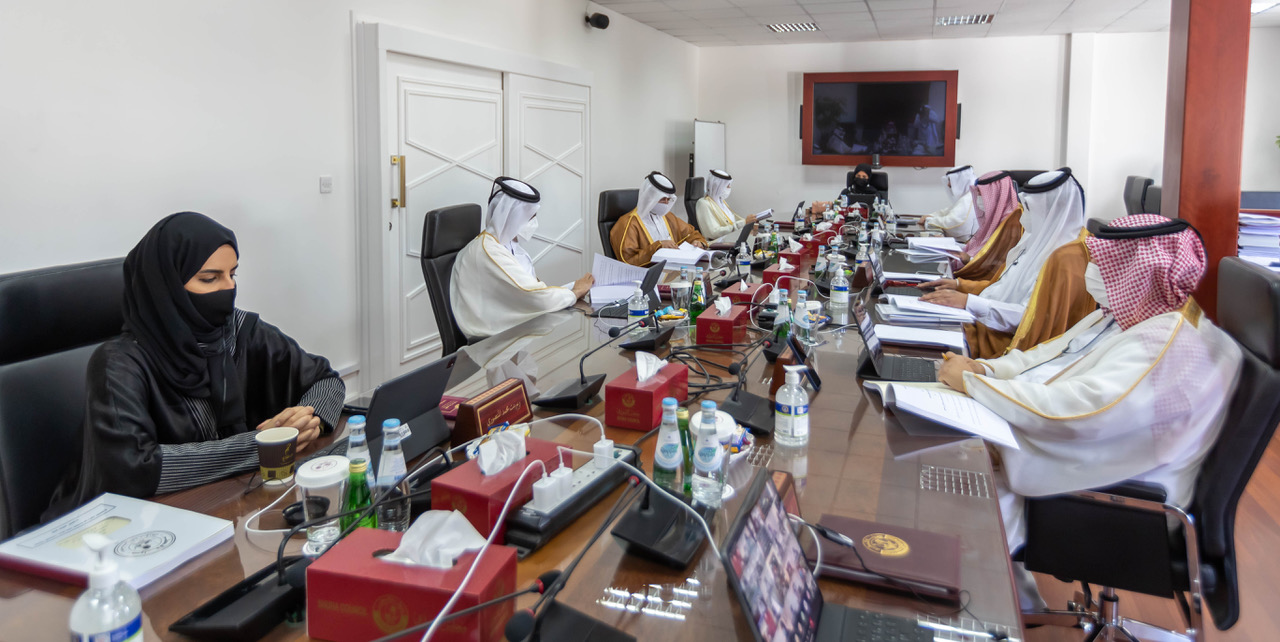 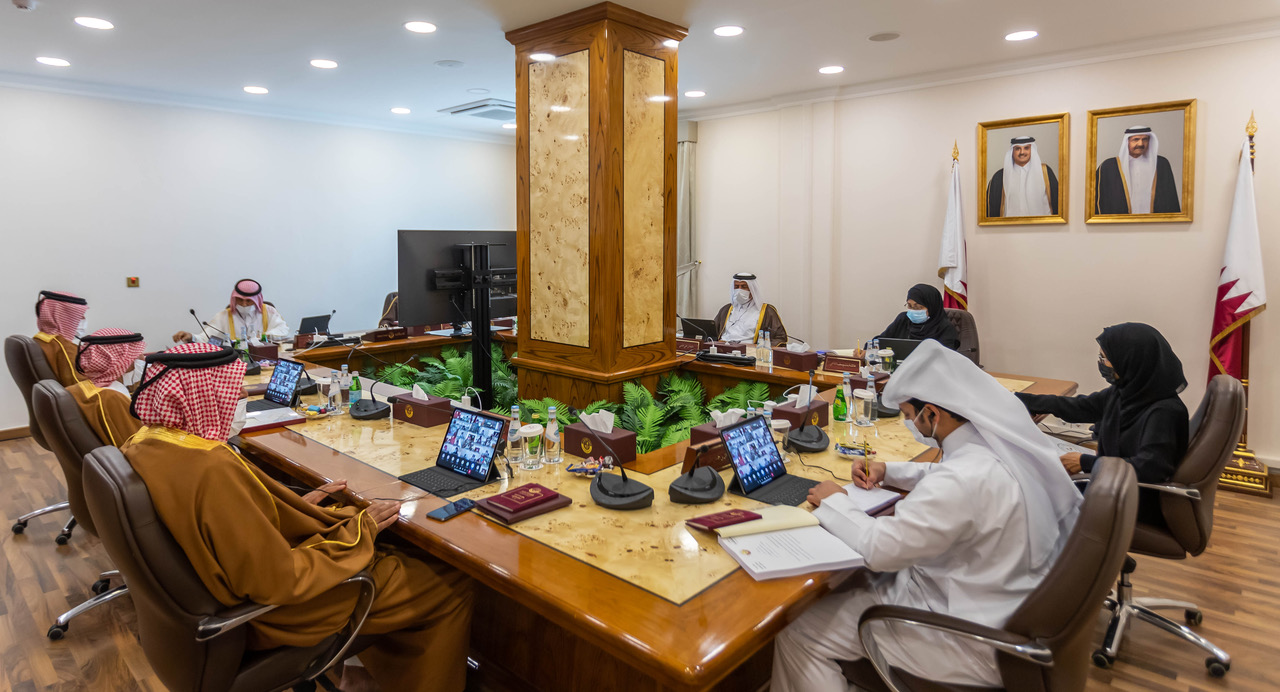 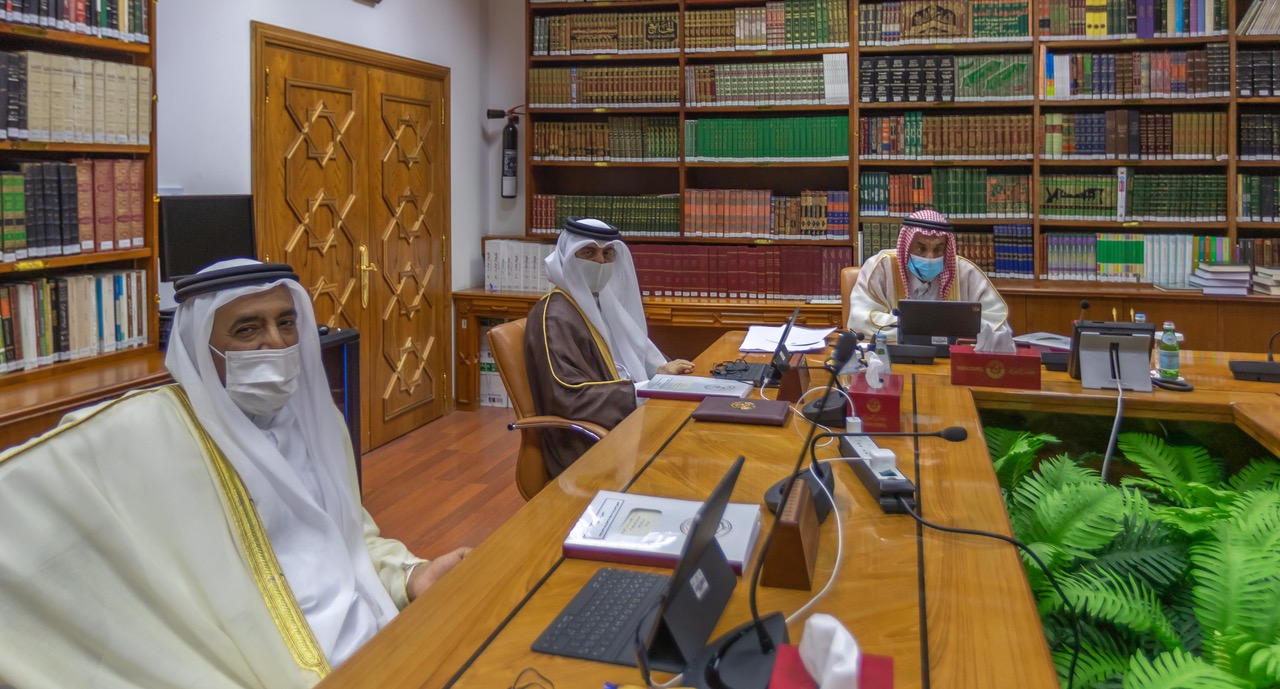 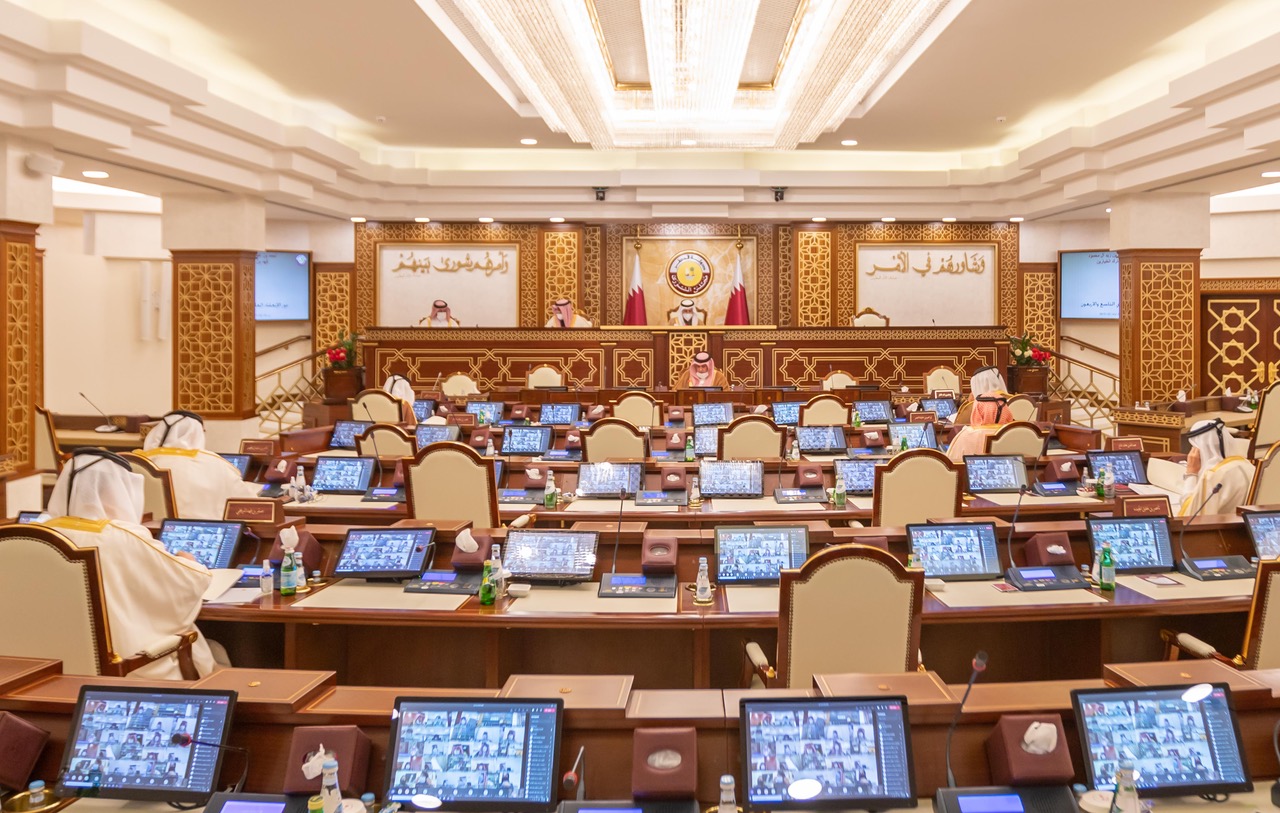 The Shura Council held its regular weekly meeting on Monday under the chairmanship of HE Speaker of the Shura Council Ahmed bin Abdullah bin Zaid Al Mahmoud. The session was held via video conference technology at the Council headquarters.

At the outset of the session, the Council stressed the importance of preserving values, principles and ethics in society, which was previously discussed in a session held by the Council, and the Council referred the issue to the Information and Cultural Affairs Committee to further study it in light of a number of papers submitted by a number of members on this issue.

After extensive discussions of the committee's report, the Council approved a number of recommendations and decided to refer them to the esteemed government.

The recommendations came in four axes along with a main recommendation. The religious and moral axis called for reinforcing the role of religion and the correct, clear and tolerant belief by instructing the educational, religious, cultural and media systems to coordinate between them, establish moderate specialized Islamic websites supervised by an elite of scholars with the aim of disseminating correct ideas and the necessity to set controls and ethical rules for democratic practice in order to establish values for practices that achieve the interest of the homeland and the citizen.

Regarding the family and societal axis, the Council recommended to develop a national strategic plan for community security that includes vision, goals, controls and rules that ensure the building of a strong society that adheres to its religion and belief and is proud of its values and morals, monitor the intrusive thoughts in society and address them within the family and society by raising the awareness of parents of the importance of their educational role, activate the role of civil society institutions in promoting the right ideas in line with our Sharia, customs and traditions, through a specialized method concerned with evaluating what is published and issued on the Internet and social media, adopt the contemporary principles related to tolerance and openness to others and learning from world cultures in harmony with our Arab and Islamic culture.

The recommendations in this axis also included the motherhood and childhood care and protection by monitoring negative phenomena that harm the social and family fabric, and to support the working mother by providing all the conditions that help her to raise her children by reducing her working hours to give her more time to take care, raise and supervise children to ensure a socially healthy family.

The council called for encouraging youth to marry, particularly, with the female citizens, to overcome the difficulties they face from the high cost of dowries, and to conduct training courses for those intending to get married in order to preserve the stability and cohesion of the family. It also called for the care of the elderly.

In the educational axis, the council recommended to develop a compulsory curriculum in public education that deals with values and morals, and that educational curricula include everything that encourages a proper religion, the virtue based tolerant belief that adheres to its principles and morals and the ethical and moral implications that contribute to building the child's characters, strengthen their spirit of citizenship, identity, responsibility and discipline, and undertake physical, mental and spiritual activities to develop students' talents in various fields in order to protect them from the causes of moral corruption, abuse and neglect and to monitor the curricula and practices of foreign schools to ensure that they do not conflict with our religious beliefs.

In the cultural and social axis, the council stressed on the consolidation of the spirit of patriotism, solidarity and brotherhood among all citizens, via providing the audio-visual and print programs that take care of the heritage, language, customs and traditions and develop loyalty to the homeland. It also stressed on the need for sincerity and mastery at work and to maintain and respect systems, calling for increased attention to national educational, cultural and social centers that support national identity, paying attention to the classical Arabic and emphasizing its use in all official correspondence as a language of communication.

In its recommendations, the council also called to take into account the values, principles, foundations and pillars upon which the Qatari society is built when inviting participants in local social and cultural forums.

Within the recommendations of this axis, the council recommended raising awareness of the sanctity of public money and its proper exploitation in accordance with the provisions of the law to avoid financial corruption, and raising the society awareness to avoid extravagance and excessive luxury by encouraging activities and events that accustom young people to take responsibility and adopt good management for their livelihood.

In its main recommendation, the Shura Council called for the establishment of a body or mechanism in charge of setting policies and coordinating efforts between the various stakeholders, and monitor, follow-up and evaluate the operational steps related to the promotion of values, principles and ethics in society.

At the end of the session, HE the Speaker of the Shura Council briefed the Council on its meeting on Wednesday with HE Speaker of the National Assembly of the sisterly State of Kuwait Marzouq bin Ali Al-Ghanim, where they discussed developing cooperation between the Shura Council and the Kuwaiti National Assembly, promoting joint Gulf parliamentary action, coordination of positions between the two councils in regional and international parliamentary events, in addition to reviewing a number of issues related to parliamentary work.

His Excellency also briefed the council on his participation in the regional meeting of the Organization of Southeast Asian Parliamentarians Against Corruption (SEAPAC) which was held last Tuesday via video conference technology, during which they discussed means to activate the role of regional branches of the Global Organization of Parliamentarians against Corruption (GOPAC), continue anti-corruption efforts despite the Coronavirus pandemic COVID 19, as well as preparing well for the special session to be held by the United Nations General Assembly next June to combat corruption and the parliamentary meetings to be held on the sidelines of the session.