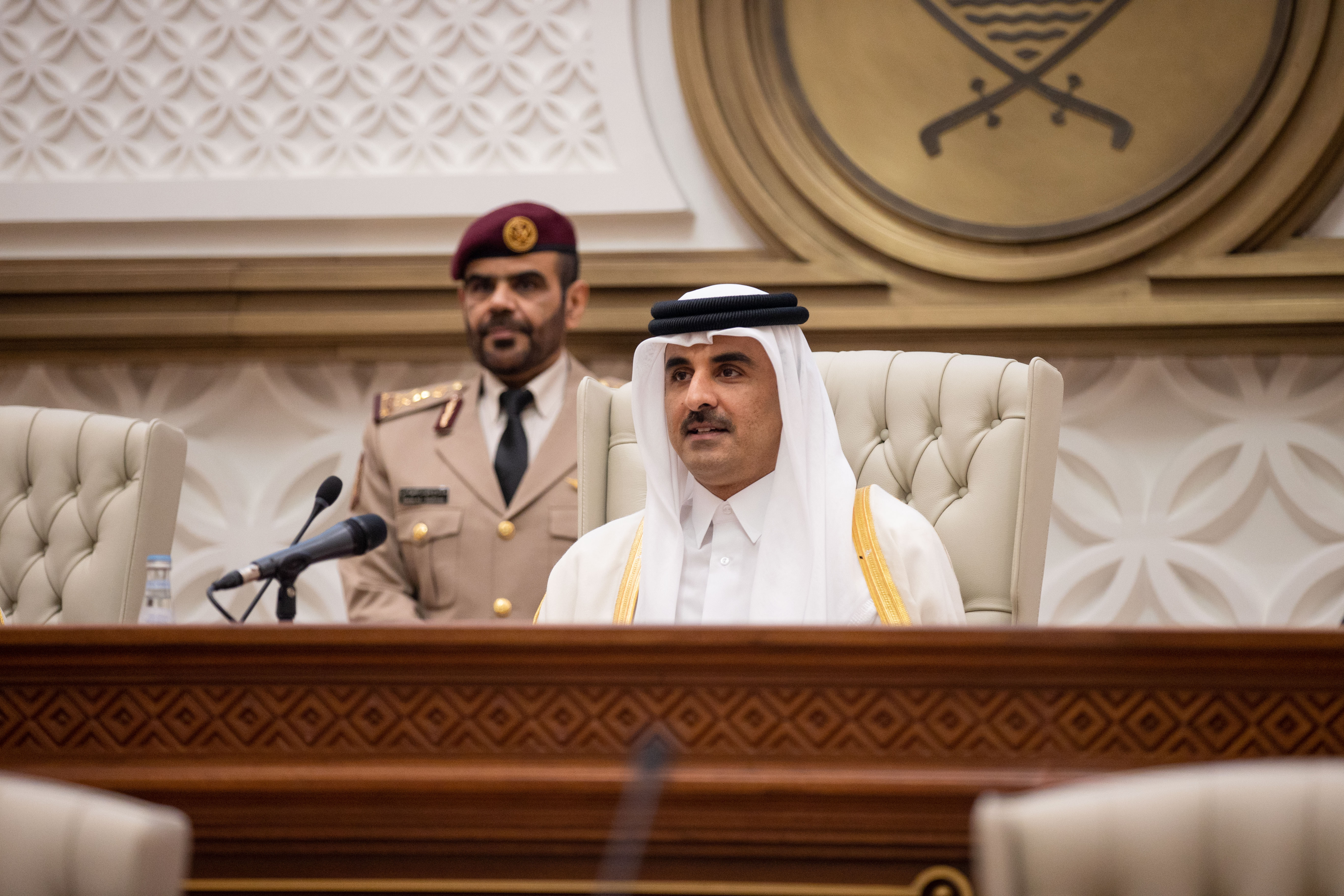 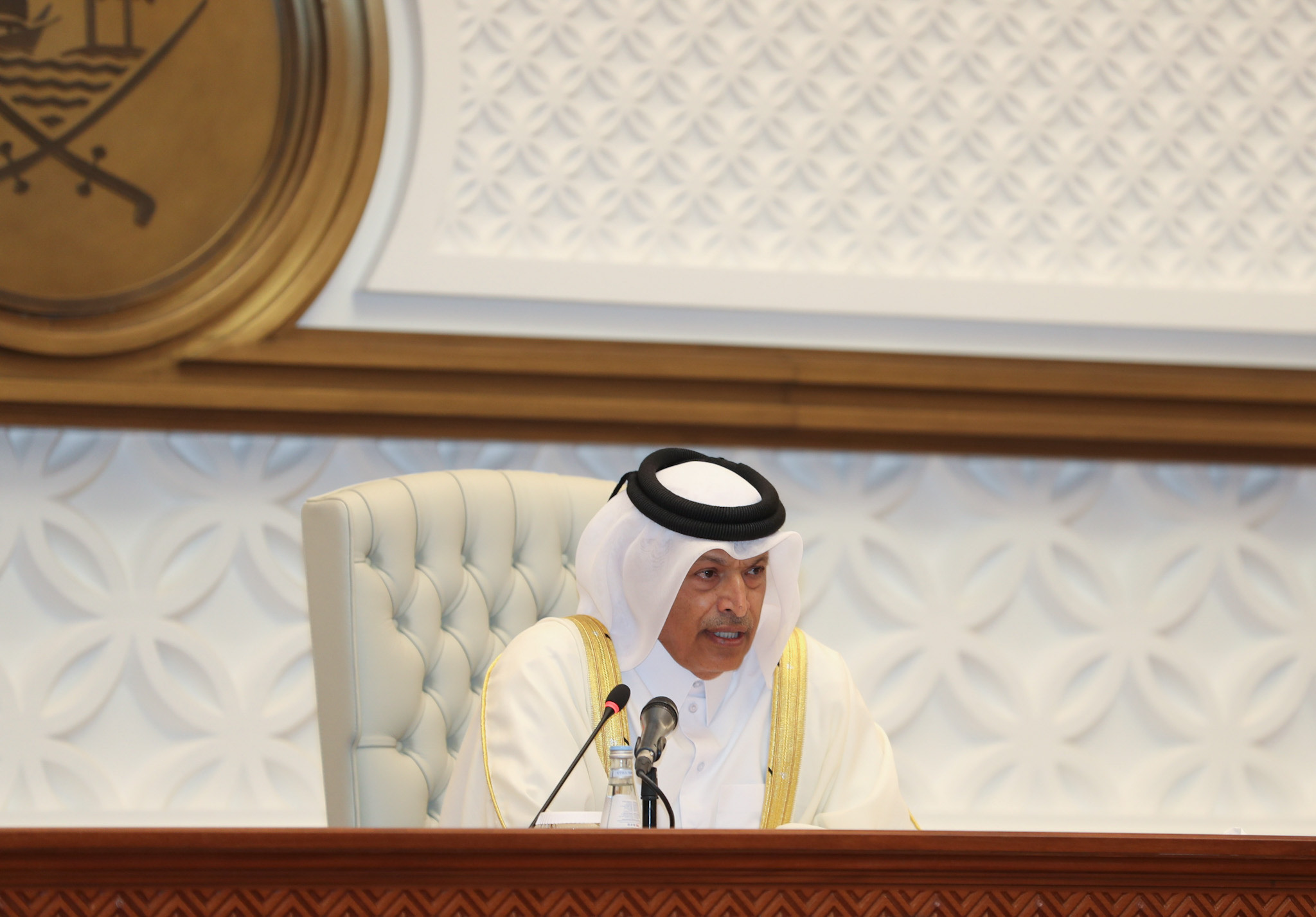 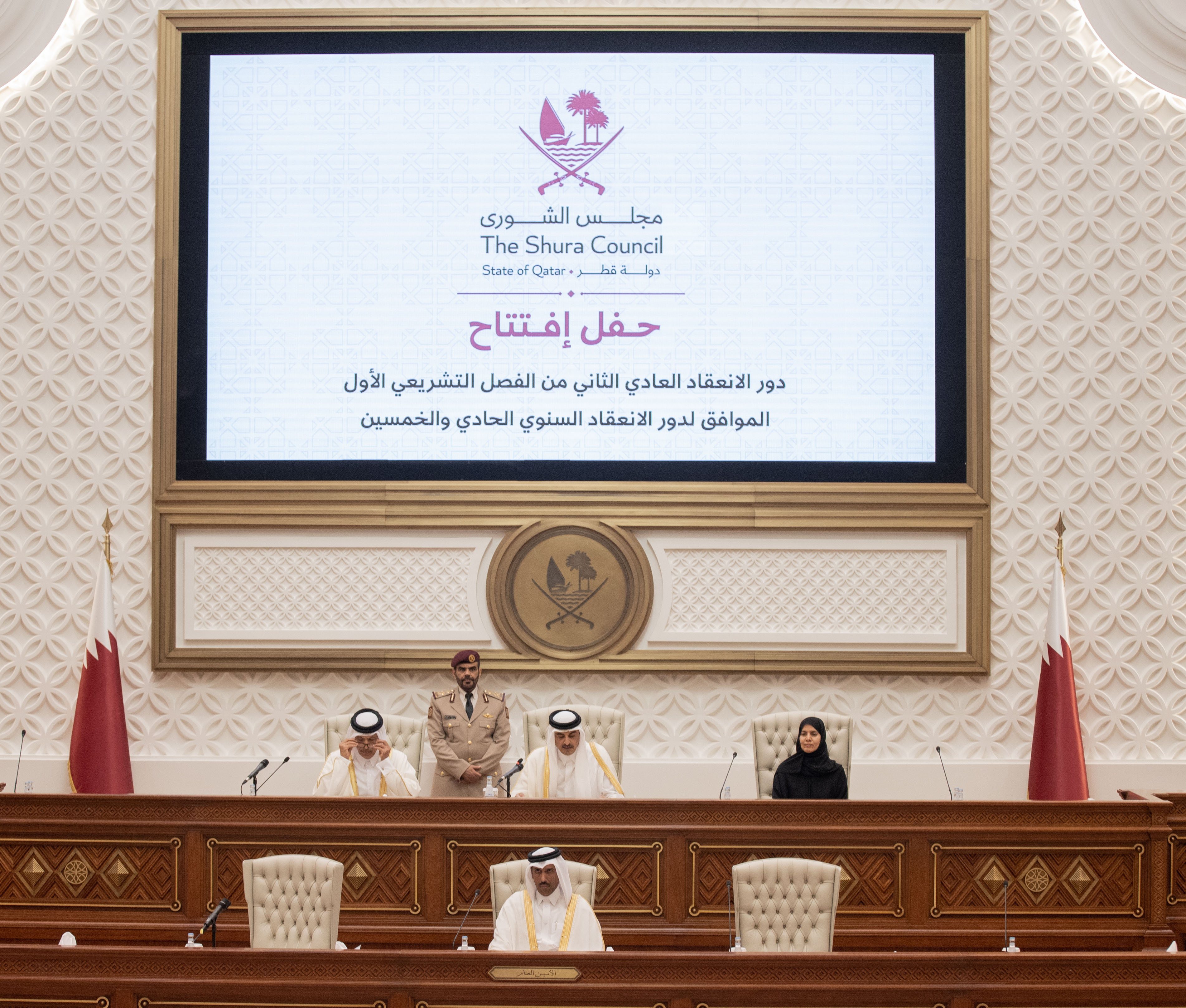 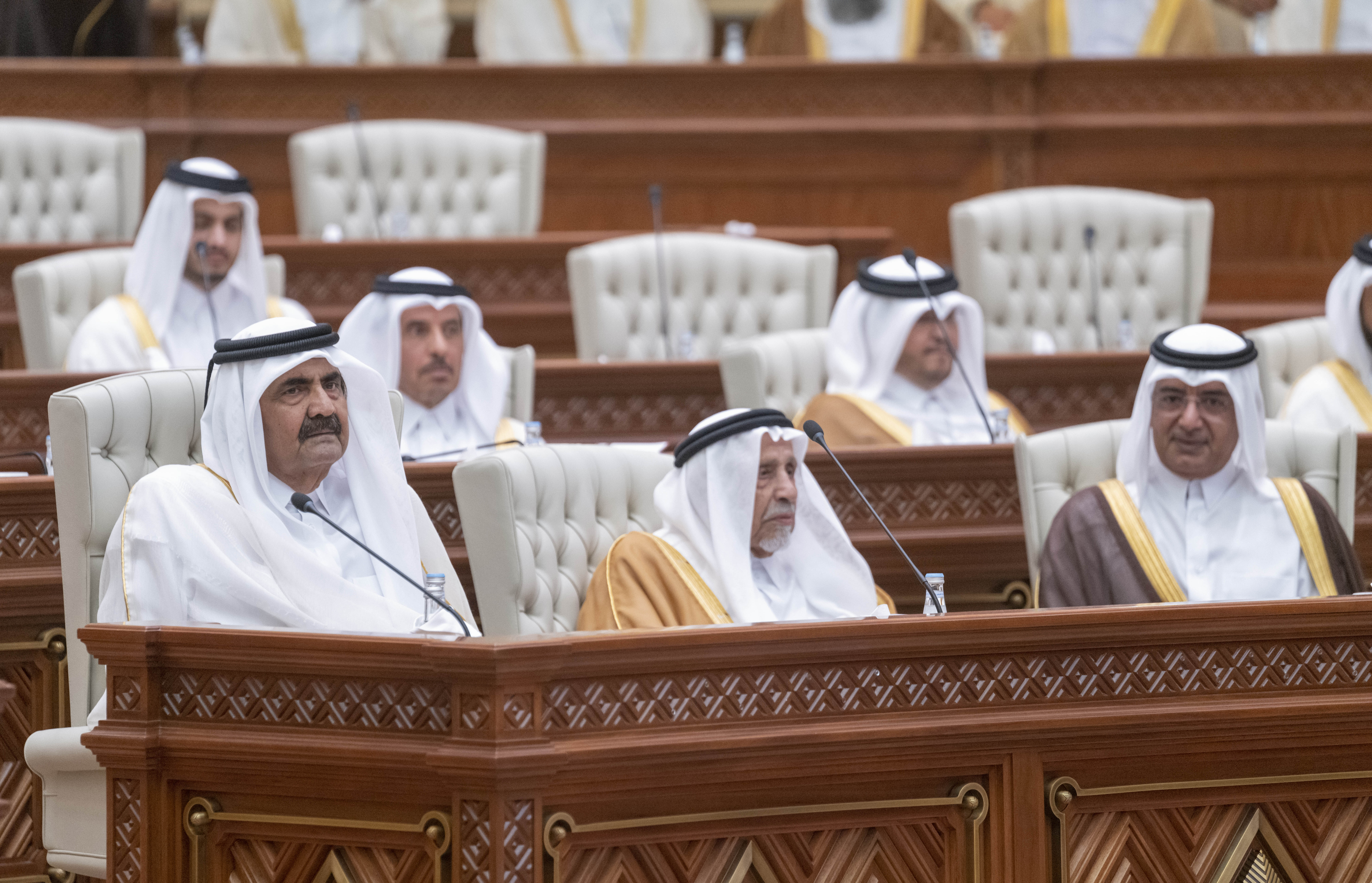 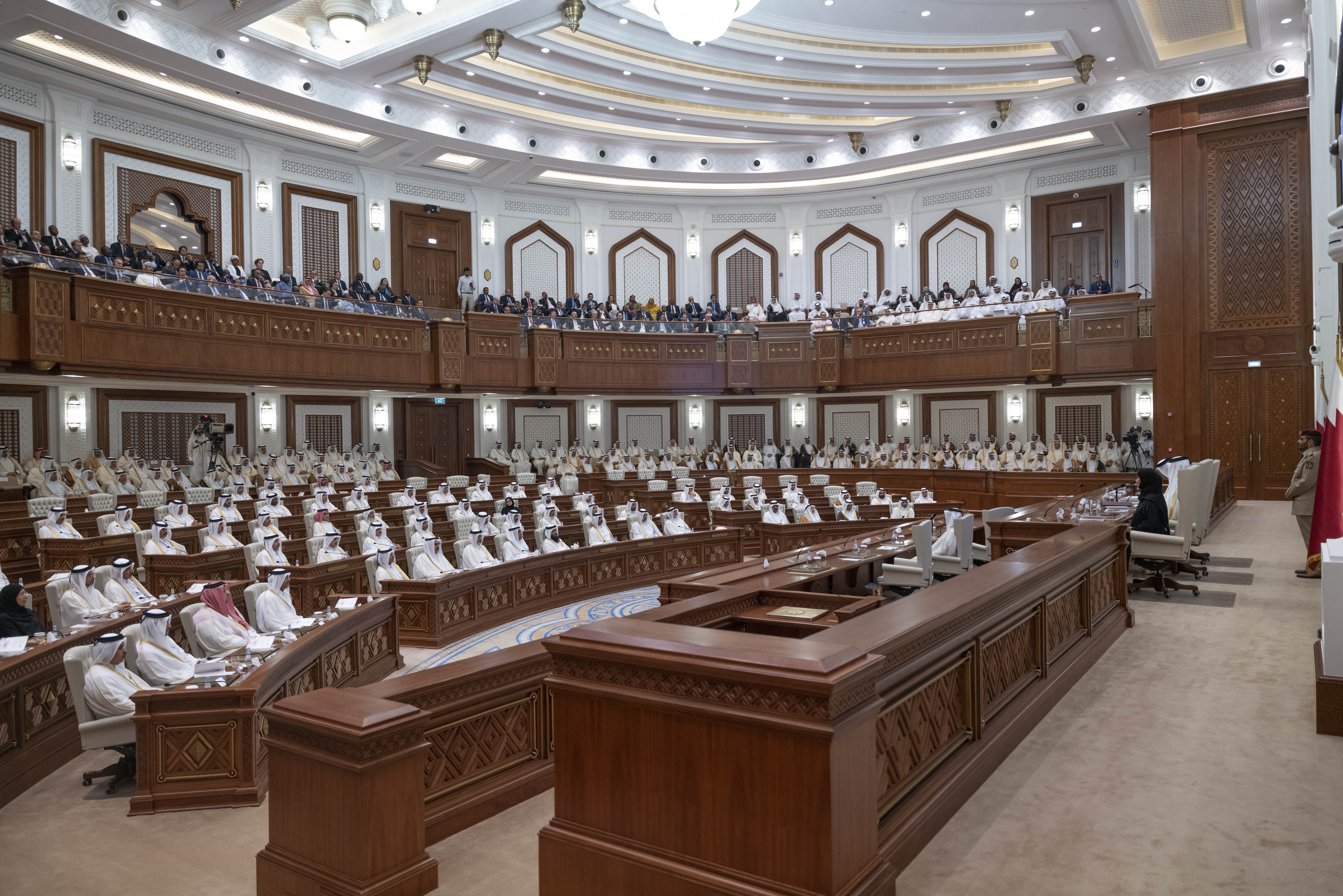 HE Speaker of the Shura Council Hassan bin Abdullah Al Ghanim valued the contents of the speech of HH the Amir Sheikh Tamim bin Hamad Al-Thani at the opening of the second ordinary session of the first legislative term corresponding to the 51st annual session of the Council.

In a speech on the occasion of the opening of the new session, HE the Shura Council Speaker welcomed His Highness in the Council, extending deepest thanks and appreciation for patronizing the opening of the session, which marks the start of a new process of achievement and giving, according to the vision of His Highness wise leadership, adhering to His Highness wise directives, looking forward to joining the loyal sons and daughters of Qatar in the development process.

HE the Shura Council Speaker added that he followed with great interest the contents of His Highness's lofty speech, which reviewed all the events and developments that Qatar witnessed during the past year and this year, discussed all internal and external developments and the many achievements, and highlighted the major event that Qatar hosts in November the FIFA World Cup Qatar 2022, which will be a milestone in the history of the FIFA World Cup. He pointed out that His Highness's speech also highlighted the important milestones and general plans for Qatar's domestic and foreign policy.

His Excellency summarized the achievements of the Shura Council in the last session, saying that the Council held 35 public sessions over eight months, during which it dealt with study, discussion, and research, many important draft laws, and requests for general discussion. He added that the Council discussed decree laws and several proposals, explaining that all of them witnessed extensive and fruitful study and discussions, and the Council's committees held nearly a hundred meetings throughout the session.

In the field of parliamentary diplomacy, His Excellency reviewed the effective participation of the Council, in person or remotely, in many regional and international parliamentary conferences and its meetings with several heads of state, officials, and parliamentary delegations.

His Excellency added that this enabled the Council to strengthen parliamentary relations with many brotherly and friendly parliaments, in addition to hosting regional parliamentary meetings in coordination and cooperation with the United Nations Office of Counter-Terrorism, as part of the activities of the Doha-based UN Office on Parliamentary Engagement in Preventing and Countering Terrorism.

Regarding efforts to activate the role of the Shura Council in the regional and international parliamentary organizations, HE Speaker of the Shura Council Hassan bin Abdullah Al Ghanim highlighted the important positions that the council has held in the Inter-Parliamentary Union (IPU), the Arab Parliament, the presidency of the Global Organization of Parliamentarians Against Corruption (GOPAC) and the Association of Secretaries-General of Arab Parliaments.

In regard to the Gulf Parliamentary issue, His Excellency noted that Qatar will host the 17th meeting of Their Excellencies, Heads of Shura, Representatives, National Assembly, and Parliament Councils of the Cooperation Council for the Arab States of the Gulf (GCC) states.

Thanks to the support of HH the Amir, the cooperation of the esteemed government, and the contribution of loyal citizens, all these achievements have been accomplished, he added.

In his speech, His Excellency addressed the violations of sanctities and repeated attacks against the Palestinians that the Arab world is witnessing, stressing that this reflects Israelis' disbelief in the necessity of peace and their will to destabilize the region.

The Shura Council believes in the repeated affirmation of HH the Amir, that the absence of peace goes on until the Palestinian people obtain their right to establish their independent state, with East Jerusalem as its capital, on the borders of June 4, 1967.

He referred to the conflicts and instability that several Arab countries are witnessing, calling on the peoples of those countries to resort to dialogue and peace, given that it is the only way that leads to ending conflicts, achieving transitional justice, and achieving stability. He also expressed his hope that the brotherly peoples of Yemen, Sudan, Libya, Tunisia, Syria, Iraq, and Lebanon will reach agreements that bring them together and achieve their will to build the future of the future generations in their countries.

HE Speaker of the Shura Council Hassan bin Abdullah Al Ghanim noted that he looks forward to the council's effective role in its new session to achieve the aspirations of the Qatari people, commending the efforts made by the members of the council towards the advancement of the State of Qatar.

He called on all to carry out their duties and fulfill them to the fullest, re-emphasizing loyalty to HH the Amir as the leader of the glorious development and renaissance, and the determination to increase efforts so that Qatar can prosper.

His Excellency concluded his speech by pledging to HH the Amir and the Qatari people that the council will carry on its approach and implement the lofty directives that were mentioned in the speech of HH the Amir, and to cooperate with the esteemed government to reach the common goals and achieve the higher interest of the State of Qatar, particularly the objectives of Qatar National Vision 2030, pointing out the current ongoing preparations to launch the third Qatar National Strategy 2023-2027 to implement the vision.

His Excellency also stressed the council's commitment to the 2022 National Day slogan 'Our Unity Source of Our Strength'.