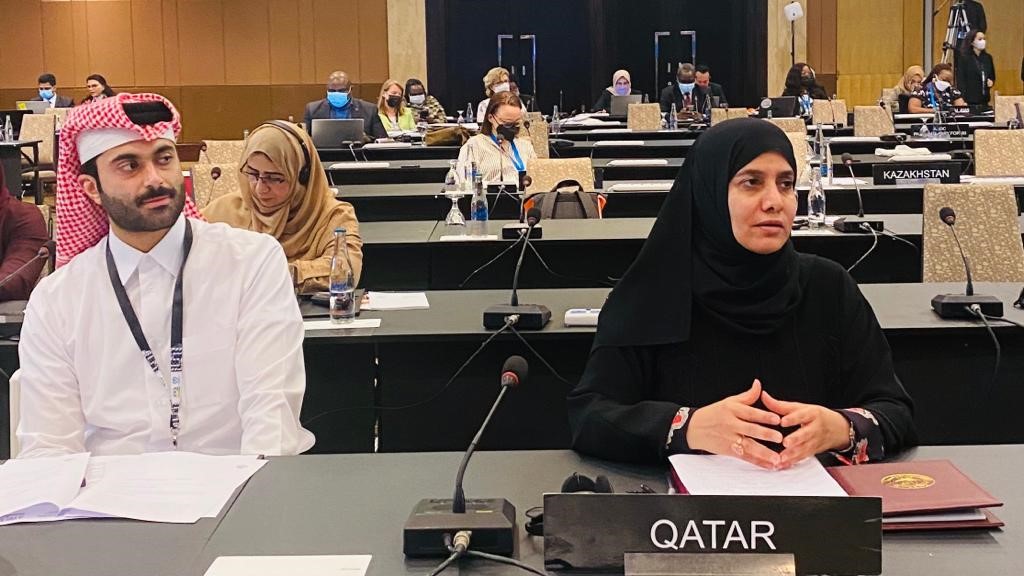 As part of the work of the144th General Assembly of the Inter-Parliamentary Union being held in Bali,the Shura Council participated today in the 33rd meeting for Forum of Women Parliamentarians.

HE Deputy Speaker of the Shura Council Dr. Hamda bint Hassan Al Sulaiti represented the Shura council in the meeting. The meetings discussed several topics related to women, equality efforts and parliamentary experiences in the fields of enhancing the health of maternal and newborn health in light of the pandemic of Covid-19. The meeting also touched on strengthening information technology as an assistance factor in education sector, including during the pandemic.

In the last axis, HE the Deputy Speaker of the Shura Council, in her speech at the forum pointed out to school suspension due to the "Covid-19" pandemic, as indicated by international reports, which led to an increase in the number of children out of education from 53 in percent to 70 percent.

Her Excellency said that according to UNESCO statistics, there were approximately 1.5 billion students worldwide, from pre-primary education to secondary school affected by interruption of education as a result of school closures, and there was an increase in poverty as a result of the pandemic,as well as the inequality in education exacerbated, noting that one of the reasons that led to this situation is the lack of technology, electricity, the Internet and digital devices.

Her Excellency called for creating funds for education in crises and emergencies in order to avoid similar problems, and that these funds should be under the umbrella of international organizations concerned with education, children and refugees, and with international funding.

Her Excellency stressed the importance of supporting pioneering educational initiatives in the field of education, referring, in this context, to Qatar's initiatives, including HH the Amir Sheikh Tamim bin Hamad Al-Thani's initiative to educate a million girls in small islands and developing countries, as well as "Education Above All" Chaired by HH Sheikha Moza bint Nasser, and "Educate a Child" program, which covered nearly 12.8 million children deprived of primary education, 48 percent of whom are girls, with a budget estimated at more than USD 2 billion in more than 55 countries.

At the conclusion of her speech, HE the Deputy Speaker of the Shura Council noted the achievements of the State of Qatar in the field of employing technology in a distinctive way by providing technological infrastructure, video lessons, educational platforms and others, which contributed to providing education for all children. Her Excellency indicated that the challenge faced by students during the pandemic was limited to social and psychological dimension.