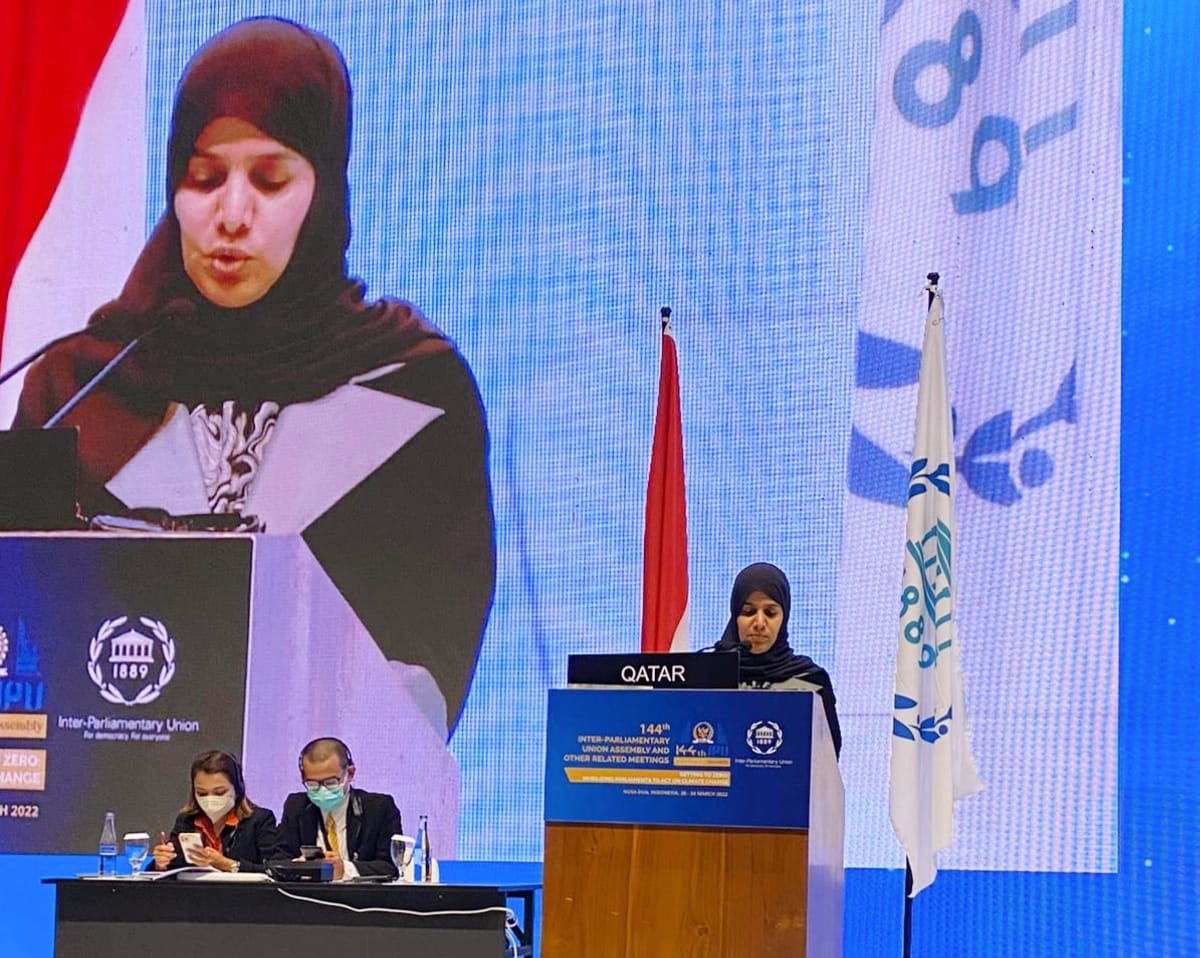 HE Deputy Speaker of the Shura Council Dr. Hamda bint Hassan Al Sulaiti stressed that the issue of reducing carbon emissions concerns all humanity and affects its future, calling for the need to commit to reducing carbon emissions to net-zero by 2050. Her Excellency pointed out the possibility of accomplishing this task if all countries and the main economic actors join forces. This came in Her Excellency's speech while chairing the State of Qatar's delegation that participated in the work of the 144th General Assembly of the Inter-Parliamentary Union (IPU), which is currently being held in Bali, Indonesia, under the theme of "Getting to Zero: Mobilizing Parliaments to Act on Climate Change." HE indicated that this goal can be achieved if most countries fulfill their obligations, adding that this will help developing countries to reduce the number of deaths and protect farms and living organisms threatened by the increase in toxic emissions. In this context, HE Dr. Al Sulaiti reviewed the initiatives of the State of Qatar in the field of environmental preservation, thanks to the wise policy of HH the Amir Sheikh Tamim bin Hamad Al-Thani, pointing to the launch of "Qatar National Environment and Climate Change Strategy (QNE)", which is one of the main pillars for achieving Qatar National Vision 2030, and compatible with the 17 Sustainable Development Goals endorsed by the United Nations, as well as its commitment to host a carbon neutral version of the FIFA World Cup Qatar 2022, which will be the first version in the history of the sport. Her Excellency also noted that four of the stadiums designated to host the tournament finals have obtained the certificate of the Committee on Sustainability Assessment (COSA), pointing to Qatar's commitment to the promises it made to use solar energy to operate the tournament stadiums, recycle water and materials, and plant green spaces to reduce carbon emissions, as well as dismantling some stadiums after the tournament to be reused in other countries, which is embodied through Qatar's interest in clean and renewable energy by issuing the necessary legislation to achieve this noble goal. In a related context, HE the Deputy Speaker of the Shura Council also reviewed the initiatives of HH the Amir at the international level, including the announcement of the State of Qatar's contribution of USD 100 million to support small island developing states and least developed countries to address climate change and environmental challenges, as well as building the capacity to face its devastating effects. She referred to Qatar's prominent role through Qatar Airways (QA) during the pandemic in transporting passengers, medicines, vaccines, and medical equipment to many countries all over the world, reviewing the innovative environmental solutions provided by the national carrier in the field of environmental preservation. In another context, HE Dr. Al Sulaiti also touched on the tension the world is witnessing in some regions, including the recent developments between the Russian Federation and Ukraine, which threatens international peace and security in the region and around the globe. In this regard, Her Excellency noted the State of Qatar's belief in the need to respect the national sovereignty of all countries, the importance of peaceful coexistence between countries, strengthening cooperation between them, and resolving all disputes by peaceful means, in addition to the necessity of negotiations and resorting to international legitimacy and international law, expressing Qatar's hope for the IPU General Assembly to be an essential party in appealing to all parties to stop the fighting and resolve the dispute peacefully for the good of the peoples and humanity.