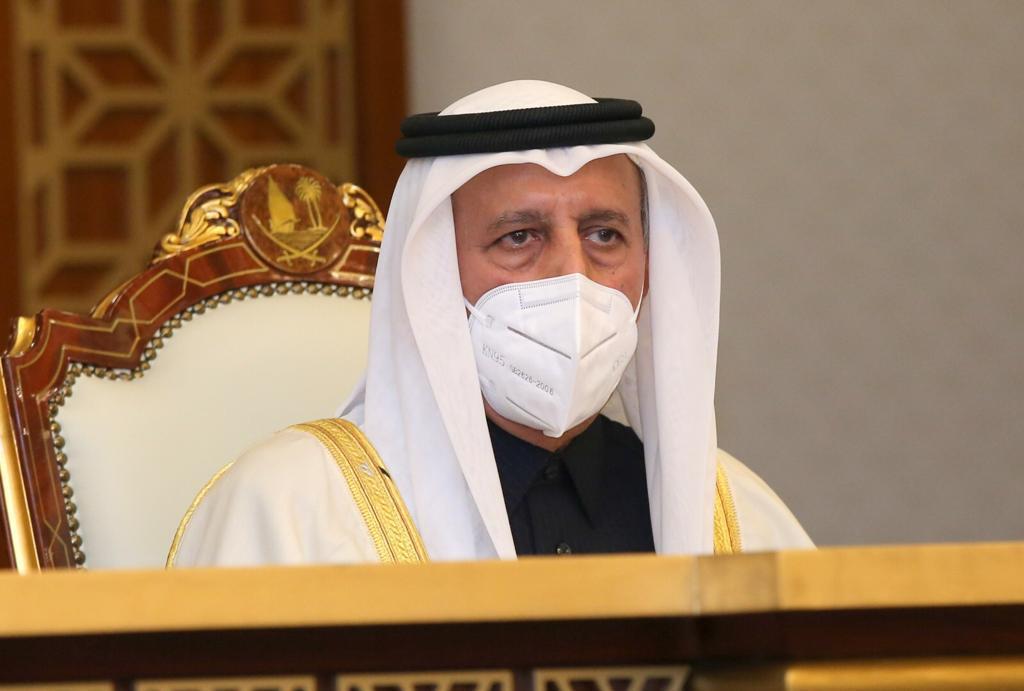 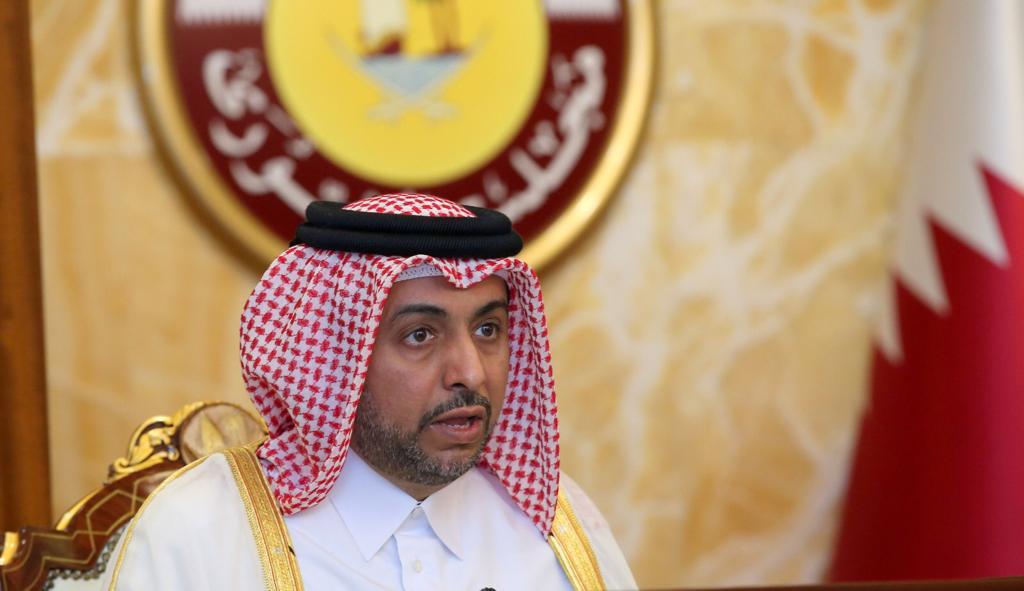 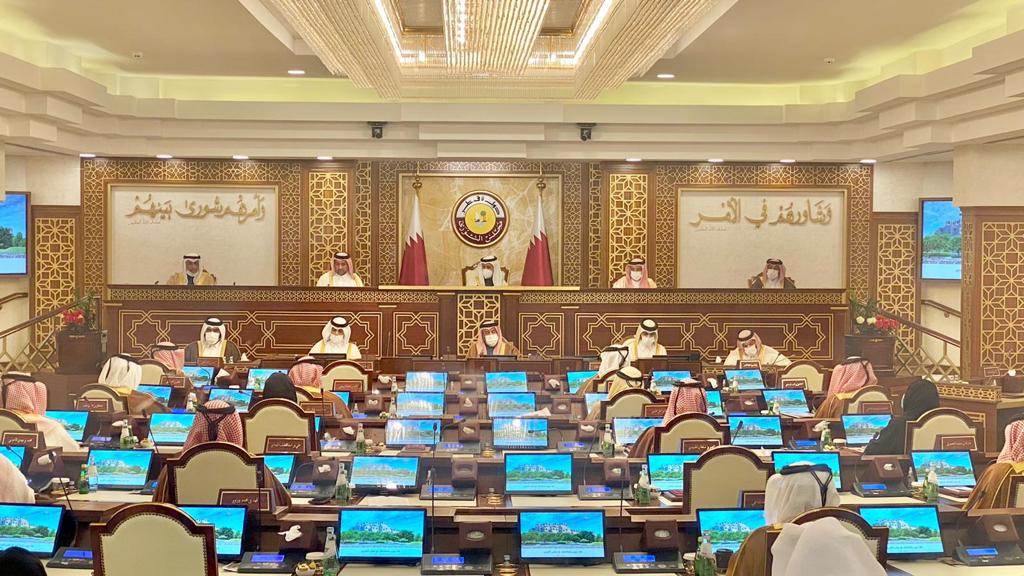 The Shura Council held its regular weekly meeting on Monday under the chairmanship of HE the Speaker Ahmed bin Abdullah bin Zaid Al Mahmoud.

At an invitation from HE the Speaker, the session was attended by HE President of Qatar University (QU) Dr. Hassan Rashid Al Derham and a number of his deputies to make a presentation on the university's conditions, affairs and its relationship with society in the State of Qatar.

HE the Speaker of the Shura Council welcomed HE the President of QU and invited him to speak to the members of the Council, listen to their views, and answer their questions and inquiries.

At the outset of the session, HE the Speaker Ahmed bin Abdullah bin Zaid Al Mahmoud extended his sincere thanks and appreciation to HH the Amir Sheikh Tamim bin Hamad Al-Thani for his interest and sponsorship of university education in the country, and for His Highness directives in this field through which university education has advanced greatly.

HE the Speaker of the Shura Council praised the development and expansion Qatar University is witnessing, and the remarkable progress it has made in university rankings at the Arab and international levels.

In his speech to the Shura Council, HE the QU President made a full explanation of the university's strategy during the period from 2018 to 2022, its goals and future plans, the framework for organizing basic and enabling strategies for the university's transformative strategy and its most prominent initiatives, expressing the university's appreciation for the care and attention it has received from the state's leadership since its establishment until now. He added: "We have a clear vision and message."

Replying to their questions and inquiries, the QU President said that Qatar University, as a national university, pays attention to the identity, traditions and customs of the Qatari society, Arab culture and Islamic values, and has ambitious plans to develop the social and human sciences.

His Excellency gave details on the number of university students, the percentage of Qatari students, as well as the number of faculty members, the percentage of Qatari professors at the university, and the efforts made to attract more Qataris to work in the teaching staff, stressing that the university has a stimulating and encouraging environment to work in despite the presence of attractive offers from other institutions.

HE Dr. Hassan Rashid Al Derham announced that there are plans to develop technical research at the university, including the establishment of the Qatar University technical company, saying that this project has reached advanced stages with the Ministry of Commerce and Industry, as well as the establishment of the Qatar University knowledge group, which is a consultancy office for government agencies and others, in addition to a project for university endowment which studies on it are close to completion in order to enhance the university's financial sustainability. He also announced plans to establish branches of Qatar University in a number of Asian and African countries.

His Excellency praised the existing cooperation between the university represented by its Board of Trustees chaired by HH the Deputy Amir Sheikh Abdullah bin Hamad Al-Thani and the Qatar Foundation for Education, Science and Community Development (QF) headed by HH Chairperson of the QF Sheikha Moza bint Nasser, and HE Vice Chairperson and CEO of the QF Sheikha Hind bint Hamad Al-Thani.

The questions of the President and members of the Shura Council focused on the need to increase the percentage of Qatari professors at the university and the importance of scrutinizing the selection of the teaching staff and paying attention to the Qatari administrative cadres. There were also remarks on the importance of developing Qatari administrative cadres so that they assume leadership positions at the university. There was also a focus on graduating the good and scientifically qualified, in addition to discussions on the extent with which the university's scientific studies and research are linked to the country's strategic development plans and its needs for qualified cadres. They also discussed the development witnessed by the university in establishing faculties of medicine, pharmacy, dental medicine and health sciences and the extent of Qatari students' interest in joining these colleges, and the importance of benefiting from retired Qatari cadres in the areas in which the university sees the potential to benefit from their expertise. There were also remarks made on the grades required to accept Qatari students.

HE the Speaker of the Shura Council thanked HE President of Qatar University and his deputies at the conclusion of the session, wishing the university further progress and development in serving the country and providing it with capable national cadres.

For his part, HE Al Derham praised the fruitful discussions that took place during the sessions, and the remarks made by members of the Shura Council, adding that they will be taken under consideration.

After the conclusion of deliberations on Qatar University, the council resumed the session in the presence of HE President of the Inter-Parliamentary Union (IPU) Daniel Pacheco.

HE Speaker of the Shura Council welcomed His Excellency and expressed appreciation of his choice of the State of Qatar as the first destination of his visit.

His Excellency praised the experience of Pacheco in the parliamentary field and his important role in implementing the goals of the IPU when chairing the Portuguese delegation and the IPU's 12 Plus Geopolitical Group which includes parliaments from European nations, Australia, Canada, and New Zealand.

HE Speaker of the Shura Council stressed the council's commitment to cooperating with HE President of the IPU in all fields related to the union's future event, particularly those related to enhancing parliamentary work in establishing peace and security, as well as solving world problems like poverty, terrorism, and climate change to help all countries achieve sustainable development.

For his part, HE the President of the Inter-Parliamentary Union expressed his happiness to visit the State of Qatar, praising the wise policy of the State of Qatar under the leadership of HH the Amir Sheikh Tamim bin Hamad Al-Thani in helping brotherly and friendly countries resolve disputes through diplomatic means.

His Excellency welcomed the announcement of His Highness that elections for the Shura Council will be held next October, praising the renaissance the State of Qatar is witnessing in various fields and the influential role it plays at the regional and international levels in for peace and development in the world and defending peoples' issues.

He also praised the fruitful efforts of HE the Speaker of the Shura Council to promote joint international parliamentary work and achieve the goals of the Inter-Parliamentary Union, pointing to the election of HE Ahmed bin Abdullah bin Zaid Al Mahmoud as President of the Global Organization of Parliamentarians Against Corruption, and to the United Nations choosing Qatar to be the headquarters of the Office of Counter-Terrorism (UNOCT) Program Office, which is concerned with parliamentary engagement in preventing and combating terrorism.